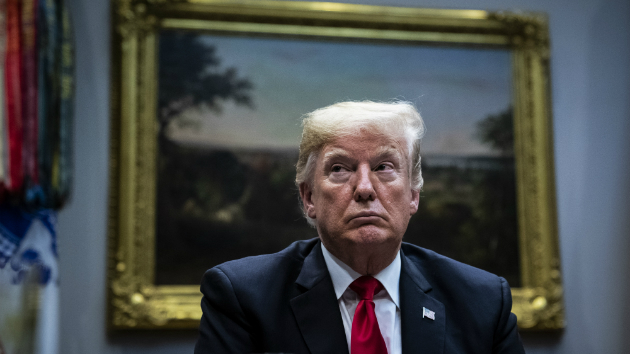 Jabin Botsford/The Washington Post via Getty Images(WASHINGTON) — President Donald Trump took to Twitter Thursday with an extensive defense of his decision to withdraw U.S. forces from Syria, framing it as a campaign promise kept amid growing bipartisan backlash from lawmakers.
"Does the USA want to be the Policeman of the Middle East, getting NOTHING but spending precious lives and trillions of dollars protecting others who, in almost all cases, do not appreciate what we are doing?" Trump tweeted. "Do we want to be there forever?"

Does the USA want to be the Policeman of the Middle East, getting NOTHING but spending precious lives and trillions of dollars protecting others who, in almost all cases, do not appreciate what we are doing? Do we want to be there forever? Time for others to finally fight…..

The president also claimed in a separate tweet that "Russia, Iran, Syria & many others are not happy about the U.S. leaving."

….Russia, Iran, Syria & many others are not happy about the U.S. leaving, despite what the Fake News says, because now they will have to fight ISIS and others, who they hate, without us. I am building by far the most powerful military in the world. ISIS hits us they are doomed!

But that argument contradicts warnings from a bipartisan coalition of lawmakers Wednesday evening following the president's announcement.
"The withdrawal of American presence from Syria also bolsters two other adversaries to the United States, Iran and Russia," the group wrote in a letter addressed to Trump. "As you are aware, both Iran and Russia have used the Syrian conflict as a stage to magnify their influence in the region."
The letter was signed by Sens. Lindsey Graham, R-S.C., Jeanne Shaheen, D-N.H., Joni Ernst, R-Iowa, Angus King, I-Maine, Tom Cotton, R-Ark., and Marco Rubio, R-Fla.

The line of criticism was echoed by Fox and Friends host Brian Kilmeade just minutes before the president sent out his first defensive tweet.
"He is doing exactly if not worse than President Obama did. This is worse than blurring the ‘red line,’” Kilmeade said.

In a news conference Thursday, Russian President Vladimir Putin confirmed that he approved of Trump's decision to withdraw U.S. forces.
“If the U.S. removes its contingent, that is correct,” Putin said. “Let us not forget that American troops, your troops in Syria were not there legitimately."

The sudden nature of the president's decision, which he confirmed in a Wednesday morning tweet, reportedly caught many of his military advisors and the State Department off guard.
But the president contended Thursday that it should be "no surprise," and was in line with many of the promises he made before and during his run for president.

Getting out of Syria was no surprise. I’ve been campaigning on it for years, and six months ago, when I very publicly wanted to do it, I agreed to stay longer. Russia, Iran, Syria & others are the local enemy of ISIS. We were doing there work. Time to come home & rebuild. #MAGA

Trump did consistently campaign against U.S. military adventurism in the Middle East, at one point making the argument, "everybody that's touched the Middle East, they've gotten bogged down."
And in an April news conference, Trump previewed the potential for withdrawal.
"We'll be coming out of Syria, like, very soon. Let the other people take care of it now," Trump said.

In a video posted to his Twitter Wednesday evening and again Thursday morning, Trump again repeated his claim that the U.S. has "won against ISIS" and suggested that American troops killed in action in overseas conflicts are looking down with pride at his Syria decision.
"We’re proud to have done it," Trump said. "And I’ll tell you, they’re up there looking down on us and there’s nobody happier or more proud of their families to put them in a position where they’ve done such good for so many people."