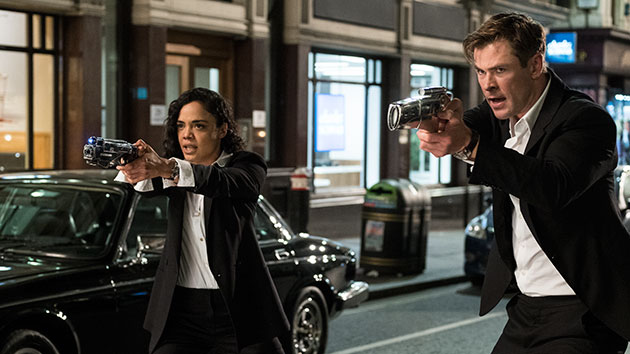 L-R: Tessa Thompson and Chris Hemsworth; Giles Keyte/© 2018 CTMG(NEW YORK) — The Men in Black are back — this time in London — in the first trailer for Men in Black: International.

Thor: Ragranrok stars Chris Hemsworth and Tessa Thompson reunite for the sequel-ish reboot that has Thompson's character tracking down MiB headquarters and talking herself into the black suit and shades. She's partnered with Hemsworth's Agent H — yes, we see what you did there — who's apparently legendary even if he does appear at first to be a bit of a tool.

There's no real clue concerning what the big bad is this time, only that it's threatening the planet, of course. Time to cue the zap guns, tricked-out black sedans, neuralizers, and everybody's friendly aliens, the worms.

Emma Thompson's also back as MiB head O, while Liam Neeson plays the agent who apparently was once Hemsworth's partner but who now also appears to be running things at O's side.

There's even a glimpse of Will Smith and Tommy Lee Jones' Agents J and K, courtesy of a painting of them fighting the giant cockroach from Men in Black. Next to that is a painting of Neeson and Hemsworth fighting a big, scary something in Paris, so clearly they're meant to be Europe's answer to J and K.

If you're wondering why we need a reboot? The three Men in Black films — released in 1997, 2002 and 2012 — have together grossed well over a billion dollars globally. So there you go.