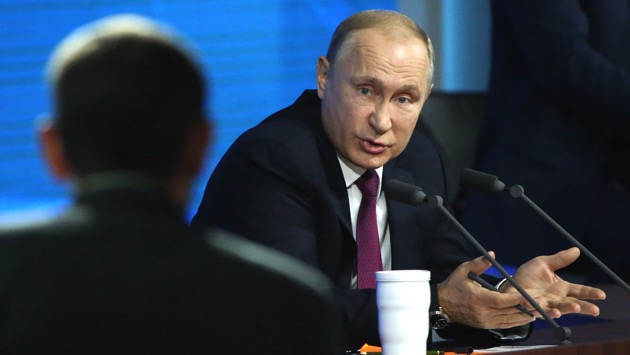 Mikhail Svetlov/Getty Images(MOSCOW) — Russian President Vladimir Putin hosted his annual end-of-year press conference Thursday, a marathon event in which he fielded questions for hours from hundreds of journalists on topics ranging from Donald Trump to the war in Syria to his marriage prospects.
This year, the Kremlin said it had accredited 1,700 Russian and foreign journalists, who packed into an auditorium in downtown Moscow.
The press conference has become an annual ritual, held almost every year during Putin's rule in Russia. It is broadcast live via Russian state media and lasts for hours. This year, Putin spoke for just over 4 hours, still far off his record of 4 hours and 40 minutes in 2008.
Despite Putin's omnipresence on Russian television, this is one of the few occasions for foreign and independent journalists to ask a question directly of the Russian president.
The press conference, however, is heavily curated. The Kremlin press service proposes questions beforehand, and decides who will be called on to speak. Follow-up questions are not permitted, allowing Putin to disarm all but the sharpest queries and make assertions that can't be challenged. The audience is overwhelmingly friendly and often breaks into applause.
Below are some of the highlights from this year.

Withdrawal of U.S. Troops from Syria
Putin expressed support for President Trump’s decision Wednesday to withdraw U.S. troops from Syria. Trump said he was pulling the troops out because the ISIS has been defeated.
Asked whether he agreed that the terror group had been defeated, Putin said he did.
“On that, Donald is right, and I agree with him,” Putin said, referring to Trump by his first name.
Putin said it was “correct” that the U.S. troops would be leaving, saying that their presence there had been “illegitimate.”

Meeting Trump
Trump and Putin had been due to meet at the beginning of the month at the G20 summit in Argentina, but the U.S. president cancelled the meeting, citing Russia’s seizure of the sailors of 3 Ukrainian navy ships close to Crimea.
Putin said he still wished to meet with Trump.
“Will there be a meeting? I don’t know. I have said many times that I am ready to meet,” he said, saying the two needed to discuss North Korea, Syria, Afghanistan and other issues.
Putin also attacked Trump’s critics, saying they showed “disrespect for voters.”
“Trump won — it’s an obvious fact, but they don’t want to recognize that.
It’s already disrespect to voters. They don’t want to recognize the election. They are doing everything to discredit him,” Putin said. “Their values are collapsing.”

Putin’s Chef
Putin evaded a question on Yevgeny Prigozhin, known as “Putin’s Chef”, the culinary magnate accused of being behind the Russian troll factory that sought to influence the U.S. 2016 elections.
“All my chefs are members of the Federal Protection Service,” Putin said, referring to his personal presidential security service. “I don’t have any other chefs,” he said.
Special Counsel Robert Mueller has indicted Prigozhin for his role in trying to meddle in the 2016 election.

Nuclear War
Putin accused the U.S. of increasing the risk of nuclear war by threatening to withdraw from a key arms control agreement.
“We are essentially witnessing the breakdown of the international arms control order,” Putin said. He added that he was alarmed that the U.S. has shown little sign of wishing to negotiate the New START treaty, and criticized the Trump administration’s threat to withdraw from the Intermediate-Range Nuclear Forces treaty.
When a Russian state TV reporter began by telling Putin that everyone used to fear nuclear war, Putin interrupted and joked, “And you don’t anymore,” before making a lengthy warning that countries had ceased to take the threat of nuclear conflict seriously.
“Are the Americans not interested, do they not need them?” Putin said of the treaties. “Ok, we’ll survive and will ensure our own security, which we know how to do. But in general, this is very bad for humankind because it takes us closer to a dangerous threshold.”

Brexit
Britain’s embattled prime minister, Theresa May found an unlikely supporter in Putin over her efforts to avoid a second referendum over whether her country should leave the European Union.
Putin slammed the idea of a second referendum, saying it would undermine faith in democracy and said he understood May.
“The referendum was held,” he said. “What can she do? She has to fulfil the will of the people expressed in the referendum.”
Questions over Russia’s possible efforts to aid the Brexit campaign have been growing in the U.K. recently. Putin joked he didn’t want to comment on it, “otherwise they’ll accuse me of meddling again.”
But he was clear that he believed the leave vote should stand.
“Someone disliked the result, so repeat it over and over? Is this democracy? What then would be the point of the referendum in the first place?”

Marriage
In an exchange with a pro-Kremlin journalist, Putin mused that perhaps he ought to get married again soon.
“As a respectable person, I ought to do that sometime,” he said, to laughter.
Putin divorced from his wife Lyudmila in 2013 after three decades together, and with whom he has two children. Putin is famously secretive about his family, and there have been many rumors surrounding his love-life. It has been rumored — without evidence — that Putin secretly married former Olympic gymnast Alina Kabaeva.

KGB
This year’s press conference fell on a public holiday in Russia, marking the founding of the KGB, the intelligence agency in which Putin served for years as a colonel.
Putin spotted a man in the crowd holding a sign reading, “KGB and children.” The man quoted a saying to Putin: “We are all children of the KGB, just some of us were brought up differently.” The man then asked Putin whether socialism could ever return to Russia.
“I don’t think it’s possible,” Putin said.
Copyright © 2018, ABC Radio. All rights reserved.