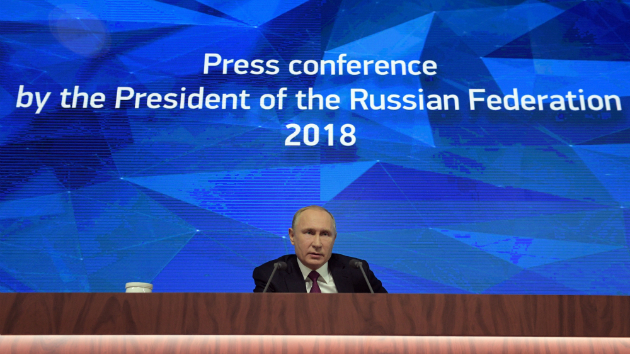 ALEXEY DRUZHININ/AFP/Getty Images(MOSCOW) — Russian President Vladimir Putin is hosting his annual end-of-year press conference Thursday, a marathon event where he fields questions for hours from hundreds of journalists on topics ranging from Donald Trump to the war in Syria to the price of milk.
This year, the Kremlin said it's accredited 1,700 Russian and foreign journalists to join Putin and Russian media officials at an auditorium in downtown Moscow.
This will be Putin's 14th such press conference. He's held one almost every year he's ruled over Russia. It's broadcast live via Russia state media, which posts an on-screen countdown clock until it begins.
Typically, Putin speaks for at least three hours. In 2008, he spoke for four hours and 40 minutes — his longest — and last year's event was about three hours and 40 minutes.
Hoping to catch the leader's attention, many reporters will be holding homemade, often ridiculous, signs — sometimes just with the name of their media outlet, sometimes with phrases like "fish factory."
Despite Putin's omnipresence on Russian television, this is one of the few occasions for foreign and independent journalists to put a question directly to the Russian president.
The event, nevertheless, remains heavily curated. The Kremlin press service decides on whom to call for questions and proposes questions beforehand. Followup questions aren't permitted, allowing Putin to disarm all but the sharpest queries and make assertions that can't be challenged. The audience is overwhelmingly friendly and often breaks into applause.
This question-and-answer session has helped the Russian leader burnish his media image, allowing him to present himself as an all-powerful leader with even the most mundane details at his finger tips while creating an illusion of access.
Putin, amid a troubled economy, has focused on domestic issues during the last two press conferences, but given the event's scope and reach, it likely will touch on every major international issue that affects Russia.
Ahead of the press conference, Putin's press secretary, Dmitry Peskov, who sits on stage with Putin to call on journalists, told the Russian television station NTV that this year's event would focus on the domestic economy but also the backdrop of what he called the "aggressive and hostile" international situation.
Copyright © 2018, ABC Radio. All rights reserved.