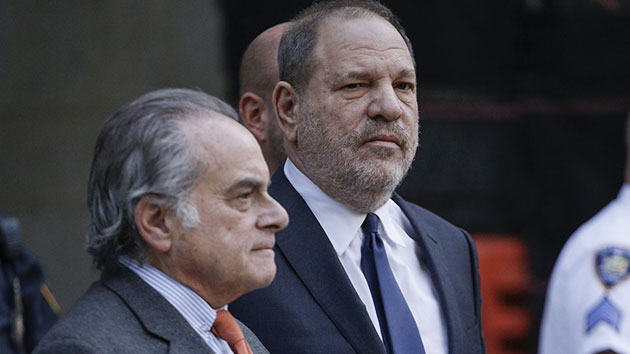 L-R: Attorney Ben Brafman and Harvey Weinstein; TIMOTHY A. CLARY/AFP/Getty Images(NEW YORK) — With actresses including Marisa Tomei and leaders of the #TimesUp movement in the spectator’s seats, Harvey WeinsteinThursday morning learned he will have to stand trial for rape and related charges.

Judge James Burke, in a brief hearing, issued his order, which he said “does not dismiss the indictment.” The defense had asked that the charges be dismissed.

Weinstein had no particular expression on this face as he at the defense table during the hearing.

Defense attorney Ben Brafman said afterward that his client is “obviously disappointed” in the judge’s ruling but confident that “ultimately at trial Mr. Weinstein will be exonerated.” He also insisted that the judge's decision "does not suggest the case against him is going to end badly.”

Weinstein's facing five criminal counts of rape and sexual assault, all of which he's denied. A sixth count against the film producer was dismissed in October after prosecutors revealed to the defense that they'd discovered a written account from Weinstein's accuser that suggested the encounter that prompted the count against him was consensual.

Weinstein's next court appearance is another hearing scheduled for March 7.