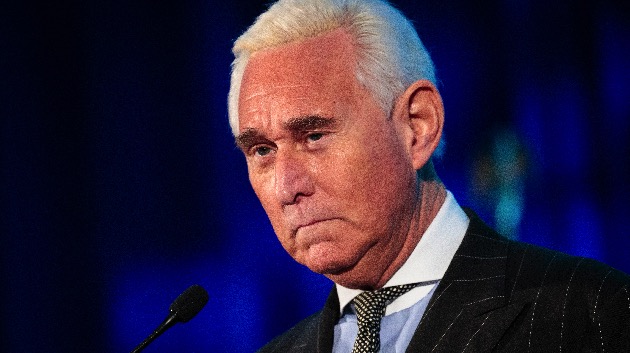 Drew Angerer/Getty Images(WASHINGTON) — The House Intelligence Committee will hand over the transcript from their closed-door, September 2017 interview with longtime Donald Trump ally and friend Roger Stone to special counsel Robert Mueller, ABC News has learned.
A source familiar with the committee proceedings on Thursday said members voted to send Stone's committee transcript to Mueller's team. On Wednesday, the special counsel's office put in its first formal request for Stone's testimony transcript, sources told ABC News.
The decision came during a business meeting Thursday morning, which had the "transmission of certain executive session materials to the executive branch" on the agenda.
Previously, the committee had already voted to release dozens of transcripts from interviews in its Russia investigation publicly, pending a declassification review from the Office of the Director of National Intelligence.
Committee Democrats have long maintained that Stone lied to the committee under oath.
In a letter exclusively obtained by ABC News from Stone to House Intelligence Committee Chairman Devin Nunes Thursday, Stone's legal team demands the full public release of the transcript.
"In order for Mr. Stone to properly and effectively defend himself from the partisan attacks that have only been made possible by the committee’s ongoing retention in secret of the only verified and accurate record of his testimony, Mr. Stone must be immediately provided this record, in full and without any arbitrary restrictions," an attorney for Stone, Grant Smith, wrote.
"Without regard to any decision or action the Committee may take in response to a request by the [special counsel], or any other person or agency, for a copy of the interview transcript, either in whole or in part, Mr. Stone hereby demands the full and immediate release to the general public of the transcript, such that the American citizenry and the world are able to evaluate for themselves Mr. Stone’s veracity," Smith added.
"This is but one of numerous instances in which Mr. Stone has been denied the essential record of his own responses to your Committee’s many questions, while individuals on the Committee such as Mr. Schiff have abused their own unfettered access to this record have waged a public campaign to falsely portray Mr. Stone’s voluntary, comprehensive testimony as somehow not truthful, accurate or complete and meanwhile never providing any specific proof of this using Mr. Stone’s actual statements," Smith argued in the letter.
"Because of the forgoing it is more imperative than ever that Mr. Stone be provided a copy of his testimony without further delay," Smith concluded in the letter.
Mueller has already charged Trump lawyer Michael Cohen with making false statements to Congress, and former national security adviser Michael Flynn with making false statements to the FBI.
While the transcripts aren’t expected to be released publicly until January, Rep. Adam Schiff, D-Calif. who is set to become the chairman of the committee when Democrats assume control of the House, has said he would expedite the process.
Stone's attorney reacted to the committee's vote to turn over Stone's interview transcript to the special counsel Thursday.
"With all the unsupported, wild accusations of the Democrats on the committee and the media frenzy surrounding the same, it is not surprising that the special counsel’s office has asked for access to the transcript, in fact, we had believed that this had taken place a while ago," Smith told ABC News. A spokesman for current House Intelligence Committee Chairman Nunes declined to comment.
Copyright © 2018, ABC Radio. All rights reserved.