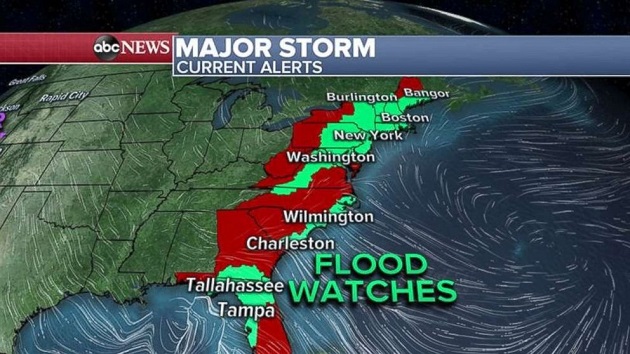 ABC News(NEW YORK) — As travelers hit the roads before Christmas, the entire East Coast is bracing for flooding.
A major storm is hitting Florida and the Carolinas on Thursday before the rain heads up the coastline to the Northeast overnight.
Tornado watches are in effect for much of Florida on Thursday, from Daytona Beach to Fort Myers.
At least two tornadoes were already reported in the Sunshine State.
A possible tornado on Thursday morning left 73 homes damaged at a mobile home community in Zephyrhills, Florida, according to initial reports from Pasco County Fire Rescue.
No injuries were reported, the department said, but five homes were deemed unsafe.
The severe storms will be pounding most of Florida and coastal North Carolina and South Carolina Thursday afternoon.
Besides tornadoes, damaging winds up to 70 mph is also a threat.
Heavy rain will spread into the Tennessee Valley and eastern Ohio Valley, but the worst flooding on Thursday will be in Florida and the Carolinas.
Thursday night, the heavy rain will reach Virginia, Washington, D.C., and New Jersey.
New York City will see its first round of heavy rain overnight and a second round Friday morning.
Boston’s first round of heavy rain will be Friday morning with a second round arriving Friday night — impacting both the morning and evening commutes.