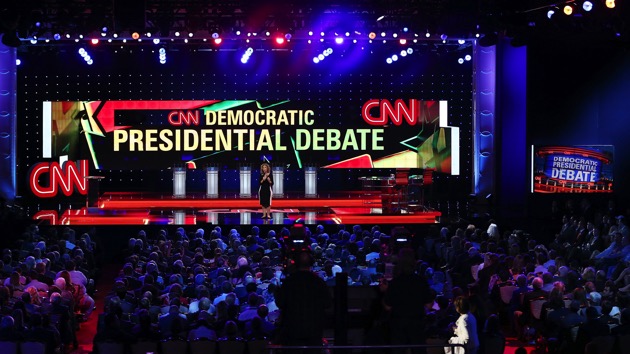 Joe Raedle/Getty Images(WASHINGTON) — The Democratic National Committee said Thursday that it will hold 12 debates for its 2020 presidential candidates, and plans to "draw lots" to sort participants and hold events on consecutive nights if it feels the field is too large for substantive discussions.
The announcement, made in a call with reporters by DNC chairman Tom Perez, comes as upwards of 30 Democratic leaders are said to be contemplating campaigns, presenting the party with the dilemma of how to include so many people in the debate process without alienating candidates or their supporters.
"This is the first step in an orderly and transparent debate process," Perez said, noting that the party had consulted with potential candidates, past campaign staffers and party members to craft the plan. "If we're going to win back the presidency in 2020, Democrats must continue to lead with our values and restore our voters' faith in the party that we love and the values that we are fighting for."
The decision represents a departure for Democrats who entertained a relatively small field in 2016, but one confronted head-on by Republicans during that cycle. The GOP organized as many as seventeen serious candidates by poll results to determine who would participate in its debates, and broke participants into groups, with those falling at the bottom of the polls appearing in derided "undercard" forums.
The Democrats' 2020 plan calls for 12 debates to be held starting in June, with six each occurring in 2019 and 2020, culminating in April 2020. Perez indicated that there will be a yet-to-be-determined threshold to gain entrance to the early debates that will include polling, as well as "objective measures that reflect a candidate's support, such as grassroots fundraising."
Should the number of candidates who meet that threshold be unwieldy, the first two debates — in June and July — could be held on consecutive nights with the participants for each drawn at random. Further, in order to expand the geographic focus of the primaries, debates in the early-voting states of Iowa, New Hampshire, South Carolina and Nevada will not be held until 2020.
"Accommodating such a large field of qualified candidates is a first-class problem to have," Perez said, adding that he believed the reforms "will put our nominee in the strongest position to defeat Donald Trump."
"They will make our party more inclusive. They will make our process much more transparent. And they will enable our voters to feel more confident than ever that the Democratic party has their back."
Intraparty trust emerged as a major issue for Democrats following Hillary Clinton's defeat of Sen. Bernie Sanders, D-Vt., in the 2016 primaries. Supporters of Sanders, who captured wide grassroots support during the cycle, frequently argued that Clinton was the party's de-facto choice and unfairly provided a larger platform and boosted by its use of superdelegates.
Though he did not address specific claims from 2016, Perez referenced disillusionment within the party, explaining that he wanted to ensure that all candidates and their supporters feel like they received "a fair shake," and that the opportunity exists for candidates to share their platforms and positions widely.
One notable criticism of Republicans' crowded 2016 debates was that the format lacked in-depth policy-focused conversations as candidates relied on quips and one-liners while jockeying for time.
"Voters want to know issues," Perez said, adding, "We want our candidates to be able to articulate their vision of America."
"We don't want debates to be discussions of what your hand size is," he said, referencing a March 2016 GOP debate in which Donald Trump and Sen. Marco Rubio, R-Fla. jousted over physical limitations.
Perez additionally stated that the party will not prevent candidates from taking part in outside forums, but that it will ask campaigns to limit those appearances to events in which only one candidate participates at a time, rather than a traditional back-and-forth debate. Both parties had sought to limit such affairs during the last presidential cycle.
"The more voters that see our candidates, the more voters that will vote Democratic, not only for president, but up and down the ballot." Perez said.
Copyright © 2018, ABC Radio. All rights reserved.