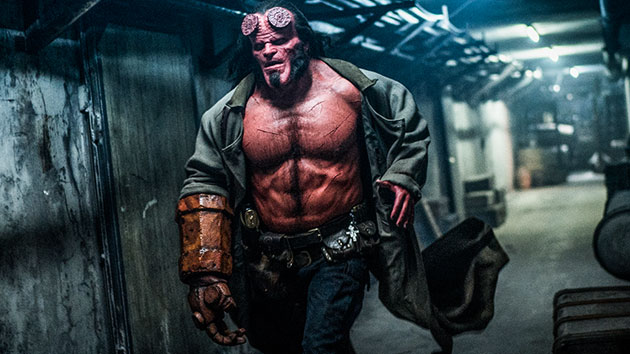 Mark Rogers/Lionsgate(NEW YORK) — Its been 14 years since Ron Perlman starred in writer/director Guillermo del Toro's big-screen adaptation of the comic book Hellboy, and over ten years since its 2008 sequel, Hellboy II: The Golden Army. Now we've got our first full-length trailer for the reboot.

Stranger Things star David Harbour steps in for Perlman this time as the title character: a demon raised by a human father to become a wisecracking, butt-kicking agent for the Bureau of Paranormal Research and Defense. Though the advance buzz about the R-rated film declares it'll be a darker take that's closer to the source material, the trailer goes the other direction — lots of funny moments and action, all staged to Billy Idol's 1981 cover of "Mony Mony."

As for Harbour, he's nearly unrecognizable under his Hellboy prosthetics, including a full-body suit to lend him the character's hulking, hugely muscled frame.

Hellboy also stars Ian McShane, Milla Jovovich, Sasha Lane and Daniel Dae Kim. It's due out April 12 of next year.

“When you think you’ve seen it all, you haven’t quite seen it all” – Netflix releases trailer for ‘Tiger King 2’
What’s the Buzz: Trailer for Pixar film ‘Lightyear’ debuts exclusively on GMA
See Sandra Bullock as an ex-con in trailer for Netflix’s ‘The Unforgivable’
David Boreanaz on looking back at 9/11 on Sunday night’s ‘SEAL Team’
Check out Jake Gyllenhaal and Yahya Abdul-Mateen II in the action-packed trailer for Michael Bay’s ‘Ambulance’
Watch the trailer for ‘King Richard’ with Beyoncé’s new song; ABC sets ‘Women of the Movement’ premiere date