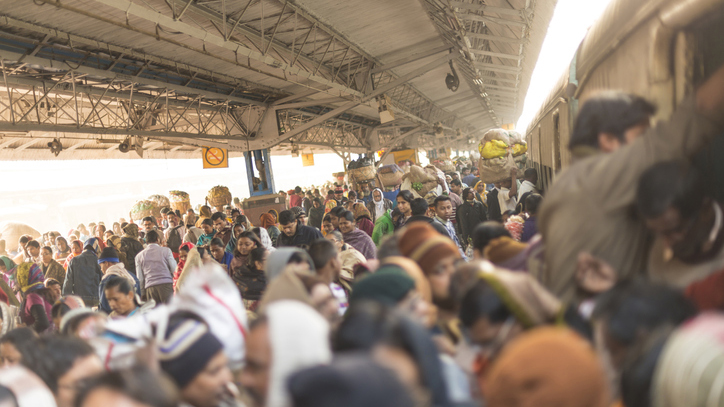 helovi/iStock(MUMBAI) — A blind 15-year-old girl in Mumbai used her self-defense skills to tackle a man who allegedly sexually molested her on a suburban train in Mumbai, India, and detain him until the police arrived, authorities said.
The teenager boarded a crowded train with her father on the evening of Dec. 16, and went to the compartment reserved for disabled people.
A few minutes after the train left the platform, Vishal Singh, 24, allegedly molested the girl, who responded by holding his finger in a tight clasp and bringing him to his knees. She then twisted his arm and he fell to the ground.
“She was trained in self-defense at her school. She immediately realized what the man was trying to do and held his finger,” Senior Police Inspector Prasad Pandhare told ABC News.
“She told her father what she was doing and why she was doing it. Her father held on to the man as well and so did fellow commuters to prevent him from escaping. She calmly waited for the next station and then handed the man over to the police who were present at the next station on the suburban railway line,” Pandhare said.
Singh has been taken into police custody, according to authorities.
He was allegedly travelling illegally in the railway carriage that is reserved for disabled people. It was later discovered that he was travelling without a ticket, the police said.
Women’s safety has been a major cause of concern in many of India’s cities over the past few years, with rape cases and other incidents of sexual violence regularly making headlines.
“Our school teaches us self-defense and karate as part of our curriculum, so we can face the world despite our disability,” the teenager told the Hindustan Times newspaper. “I want the man to suffer, to ensure he does not repeat the act with any other ‘easy target.’”
Ninety-seven cases of sexual molestation were reported on Mumbai’s suburban railway network in 2017, a steep increase from the previous year, according to the Times of India newspaper.
Activists say, however, that people are more likely to report incidents to the police as the taboo around sexual violence against women is getting discussed more openly.
“Sexual harassment is so normalized. Our take is that we want a city where we don’t want to be afraid of stepping out. There is that shame that women would feel about (reporting incidents like these) that isn’t now the case anymore,” Dr. Nandita Shah, who works with Akshara, a non-governmental organization that aims to empower women and girls, told ABC News.
Dr. Shah, along with other activists, has asked the railways to create a separate train car specifically for disabled and pregnant women. At the moment, the compartment for disabled people allows both men and women.
“The problem also is that not that many disabled people travel at the moment. But numbers cannot be there if there is no infrastructure,” Dr. Shah said.