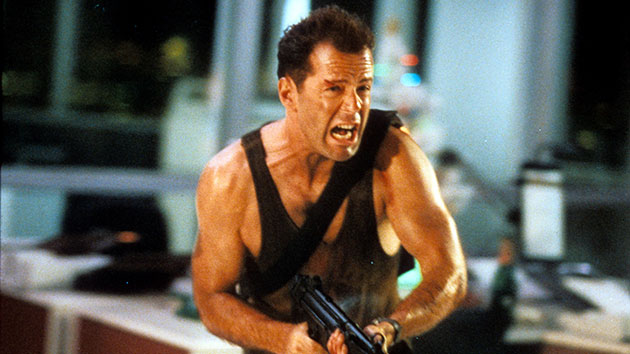 20th Century Fox/Getty Images(NEW YORK) — If a movie's set during Christmas, does that make it a Christmas movie? Fans of Die Hard have been arguing good-naturedly for years over whether the 1988 Bruce Willis wisecracking action classic — which takes place during an office Christmas party — should be considered a Christmas movie.

Apparently, the studio behind the movie believes the answer is yes.

20th Century Fox just dropped a brand-new, Christmas-themed Die Hard trailer. Titled Die Hard: The Greatest Christmas Story Ever Told, the minute-and-a-half video is definitely done tongue-in-cheek, playing up all of the Christmas references in the film, complete with a soundtrack of familiar Christmas tunes.

"This is John," begins the trailer's genial announcer, over footage of Bruce Willis as NYPD cop John McClane. "He just wants to spend Christmas with the family. But when he gets stuck at the office party, it'll be a holiday he'll never forget!"

The trailer ends with a plug for the 4K digital version of Die Hard. Fair enough.

As of Wednesday morning, the Die Hard Christmas trailer, posted late Tuesday, had over 80,000 views on YouTube, and climbing fast.

Elisabeth Moss’ “first love” is acting, but the director bug bit her hard in Season 4 of ‘The Handmaid’s Tale’
Tyrese says his “controversial” film ‘Rogue Hostage’ is “like ‘Die Hard’ inside of a grocery store”
Jodie Comer wakes up Ryan Reynolds in the new trailer for ‘Free Guy’
HBO Max drops first trailer for “Gossip Girl” reboot
‘Die Harter’: Kevin Hart’s action comedy ‘Die Hart’ lives on for season two with Roku
‘Conan’ will wrap up with live studio audiences, and Jack Black