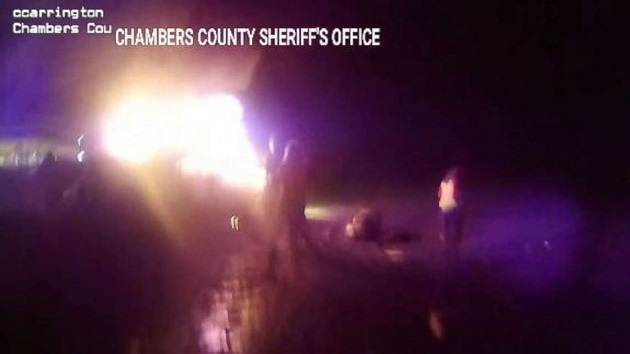 Chambers County Sheriffs Office(ANAHUAC, Texas) — Authorities in Texas shared body camera footage on Tuesday that showed officers pulling an unconscious man from a burning vehicle after a crash.
The Chambers County Sheriff's Office shared the footage on its Facebook page, documenting two officers as they tossed the man into a puddle of water in an effort to extinguish the flames on his body.
His vehicle, "fully engulfed in flames," melted parts of the officers' uniforms, according to a statement from the sheriff's office.
"The two deputies approached the vehicle without regard for their own safety and began reaching inside the vehicle to rescue the sole occupant," the sheriff's office said. "Both deputies were able to place the injured man into a nearby water puddle and extinguish all flames on his body."
"Both deputies were uninjured during their rescue of this man, however, the intensity of this fire melted parts of their equipment while on their uniforms," it added.
Video of the heroic moment received more than 45,000 views and reactions on Facebook as users praised the officers, identified as Braedon Boznango and Carlton Carrington, for their bravery.
The sheriff's office said the man would have otherwise died in his vehicle if the deputies hadn't "acted quickly, decisively and without total disregard for their own safety."
The victim, who wasn't identified, was airlifted to a Houston hospital and last listed in critical condition.
Chambers County is about 50 miles east of Houston.