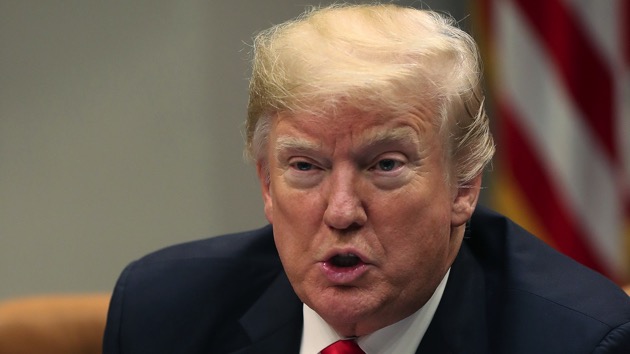 Mark Wilson/Getty Images(WASHINGTON) — President Donald Trump will announce that the U.S. will withdraw troops from Syria on Wednesday, two U.S. officials confirm.
There is no timeline yet for the pace of the withdrawal, the officials said. But a separate U.S. official told ABC News it would be dependent on the security environment for the American units, so that it's safe for them to leave. Defense Secretary James Mattis has not yet signed the official orders that would trigger the actual withdrawal, that official said, though they have been drafted.
The president's move comes after his phone call Friday with Turkey's President Recep Tayyip Erdogan, as well as Erodogan's statement that Turkey would launch a military operation against U.S.-backed Kurdish fighters in northeast Syria "within a few days."
According to a senior Turkish official, Trump told Erdogan during that call that he was planning to pull U.S. troops out of Syria.
There are about 2,000 U.S. troops in eastern Syria advising and assisting the Kurdish-led Syrian Democratic Forces (SDF) in the fight against ISIS. The first U.S. troops arrived in Syria under the Obama administration in October 2015. The original force of 50 U.S. advisers grew to an official level of more than 500, though it had actually grown beyond that figure to approximately 2,000 over the following year.
Arriving at the Pentagon on Wednesday for meetings with Mattis and other top military officials, Vice President Mike Pence ignored shouted questions from reporters about the possible withdrawal.
Trump tweeted Wednesday morning that ISIS has been "defeated," saying it was "my only reason for being there during my presidency."
White House press secretary Sarah Sanders put out a statement later Wednesday morning repeating the president's claim that the caliphate had been "defeated," adding that U.S. troops have started returning home as a "transition to the next phase of the campaign."
“Five years ago, ISIS was a very powerful and dangerous force in the Middle East, and now the United States has defeated the territorial caliphate. These victories over ISIS in Syria do not signal the end of the Global Coalition or its campaign," Sanders said. "We have started returning United States troops home as we transition to the next phase of this campaign. The United States and our allies stand ready to re-engage at all levels to defend American interests whenever necessary, and we will continue to work together to deny radical Islamist terrorists territory, funding, support, and any means of infiltrating our borders.”
Despite those claims about ISIS being "defeated," the State Department and Pentagon officials cautioned as recently as last week that the fight against ISIS was not over — with the coalition recently estimated that about 2,000 ISIS fighters remain in Syria.
"Even as the end of the physical caliphate is clearly now coming into sight, the end of ISIS will be a much more long-term initiative," Brett McGurk, the Special Presidential Envoy for the Global Coalition to Defeat ISIS, said at a State Department briefing last week. "We’ve talked about that many times. Nobody working on these issues day to day is complacent. Nobody is declaring a mission accomplished."
And a Department of Defense spokesperson told ABC News in a statement last Wednesday that "the campaign against ISIS is not over" as U.S. and SDF forces continue offensive operations against ISIS in the Middle Euphrates River Valley near the city of Hajin.
"We should not and cannot allow ISIS to breathe at this critical point or we will jeopardize the significant gains we have made alongside our Coalition partners and risk allowing ISIS to resurge," the spokesperson said.
One of Trump's usual allies on Capitol Hill, South Carolina Republican Lindsey Graham, was quick to criticize the president' move an "Obama-like mistake."
“If these media reports are true, it will be an Obama-like mistake made by the Trump Administration. While American patience in confronting radical Islam may wane, the radical Islamists’ passion to kill Americans and our allies never wavers," Graham said in a statement.
“An American withdrawal at this time would be a big win for ISIS, Iran, Bashar al Assad of Syria, and Russia. I fear it will lead to devastating consequences for our nation, the region, and throughout the world," Graham said.
In March, Trump caught most senior members of his administration off guard when he publicly announced his intention to withdraw U.S. troops from Syria “like, very soon,” sending officials scrambling to square the president’s declaration with U.S. policy. The move also contradicted his own previous criticism of President Obama for forecasting U.S. military actions.
The decision to withdraw U.S. forces comes at a moment of rising tensions between the U.S. and Turkey in northeast Syria.
Last week, the Pentagon announced it had established observation posts in northeast Syria near the Turkish border because the U.S. wanted to warn the Turks of individuals moving in that area, namely Kurdish fighters who belong to a force that Turkey considers to be an element of a terrorist group. But some of those Kurdish fighters also serve in the U.S.-backed SDF.
In the past, skirmishes between Turkey and the Kurds along the Turkish-Syrian border drew Kurdish fighters away from the final offensive against ISIS, even causing the U.S.-backed fighting force to suspend their operations for a short time.
In addition to Trump telling Erdogan he was going to pull the U.S. out of Syria, the two leaders also spoke about Turkey's security concerns there, according to a readout of that conversation from the White House released on Friday.
"The Presidents agreed to continue coordinating to achieve our respective security objectives in Syria," the readout continued.
Copyright © 2018, ABC Radio. All rights reserved.