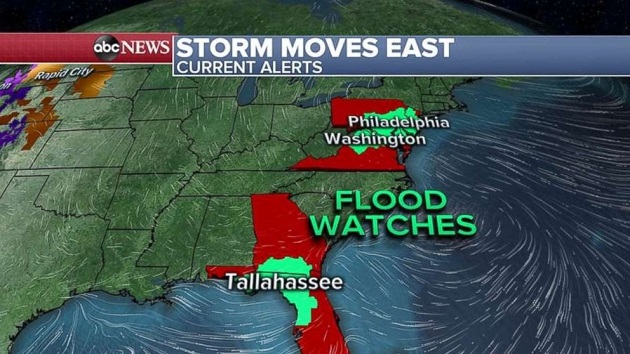 ABC News(NEW YORK) — A major storm is now moving out of the Northwest, but not before spinning up a tornado west of Seattle, delivering damaging winds of nearly 90 mph in Oregon and feet of snow in the Cascades.
The major storm is weakening Wednesday morning as it moves into the Rockies with lots of wind and some snow.
Our attention moves east as this western storm combines with a southern storm to bring heavy rain and severe weather from Florida to Maine.
Flood watches have already been issued for eight states from Florida to New Jersey.
The southern storm will move north from the Gulf Coast into the Tennessee River Valley and bring heavy rain from the Gulf Coast to the Carolinas.
By Friday, the southern storm will finally join the western storm and strengthen enough to bring severe storms from Florida to the Carolinas.
These severe storms will produce damaging winds, hail and a few tornadoes. River flooding and flash flooding are possible along the entire East Coast. Heavy rain will spread into the I-95 corridor from Washington, D.C., to Boston and into Maine.
Some areas along the East Coast could see more than 3 inches of rain.