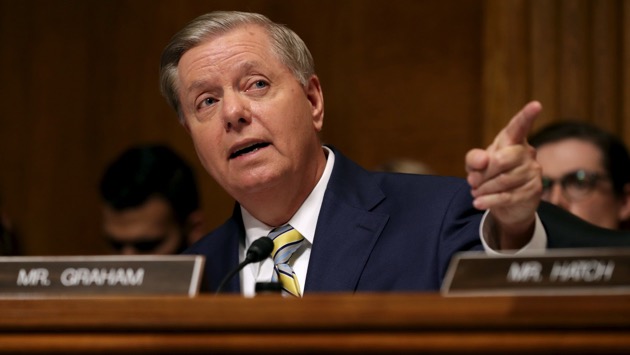 Chip Somodevilla/Getty Images(WASHINGTON) — President Trump's decision to withdraw U.S. troops from Syria has drawn the ire of a usual ally: Lindsey Graham.
The Republican senator from South Carolina first blasted Trump on Twitter, writing that the withdrawal of the roughly 2,000 U.S. troops in Syria "would be a huge Obama-like mistake."
In a statement, Graham expanded upon his tweet, writing. "While American patience in confronting radical Islam may wane, the radical Islamists’ passion to kill Americans and our allies never wavers."
He added, "An American withdrawal at this time would be a big win for ISIS, Iran, Bashar al Assad of Syria, and Russia. I fear it will lead to devastating consequences for our nation, the region, and throughout the world."
Graham serves on the Senate Armed Services Committee. He is often one of the president's fiercest defenders on Capitol Hill, speaking in support of the president during controversial moments like the revocation of former CIA Director John Brennan's security clearance and the nomination of Supreme Court Justice Brett Kavanaugh.
President Trump hinted at his decision about removing U.S. troops from Syria in a tweet.
"We have defeated ISIS in Syria, my only reason for being there during the Trump Presidency," he said.
Graham tweeted that declaring victory over ISIS is premature: "With all due respect, ISIS is not defeated in Syria, Iraq, and after just returning from visiting there–certainly not Afghanistan."
In the halls of the Senate, Graham told ABC News he will be meeting with Defense Secretary James Mattis and called for a hearing on the decision. In another jab at Trump, he said that foreign policy can't be determined over a tweet.
"I want a hearing. I want oversight. This is a Republican president who I try to work with and I like him but he can’t be immune from oversight," Graham said. Graham isn't alone in his criticism of the president. Two fellow Republicans have also questioned the White House's decision. Congressman Adam Kinzinger, R-Ill., pushed back on the president's declaration of victory over ISIS, tweeting, "This is simply not true."
Florida Sen. Marco Rubio told ABC News that pulling troops out of Syria at this time is a "colossal error."
In a video posted to his Facebook, Rubio said, "I believe the decision that was made today is a grave error that's going to have incredible consequences that potentially have not been fully thought through."
Kentucky Sen. Rand Paul said he supported the president's decision.
"We have a president with the courage to declare victory and bring the troops home," Paul said.
He added, "I think it takes courage to do this because there are a million naysayers on both sides of the aisle who always want to remain."
Copyright © 2018, ABC Radio. All rights reserved.