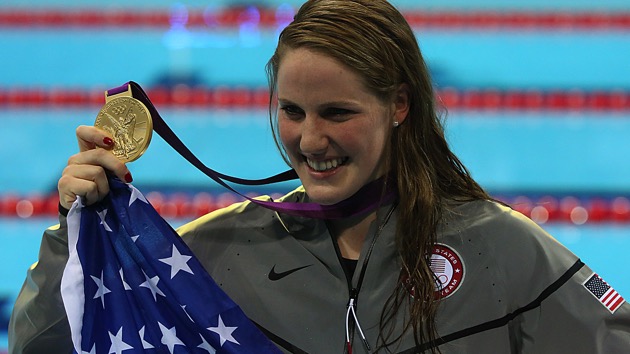 Robert Gauthier/Los Angeles Times via Getty Images(NEW YORK) — Five-time Olympic gold medalist Missy Franklin has announced she is retiring from swimming. The 23-year-old athlete's announcement was published in an article on the ESPN website.
In her statement, Franklin discussed the difficulty she faced in making the decision to retire from swimming professionally.
"It took me a long time to say the words, 'I am retiring," wrote Franklin, a two-time FINA World Swimmer of the Year. "A long, long time. But now I'm ready. I'm ready not to be in pain every day. I'm ready to become a wife, one day a mother. I'm ready to continue growing each and every day to be the best person and role model I can be. I'm ready for the rest of my life."
The pain Franklin mentioned refers to the chronic shoulder pain she has battled since 2015, according to ESPN. At 17 years old, Franklin's 2012 Olympic performance gave indication she might dominate women's swimming the way Michael Phelps had for men. But, due to constant pain and complications from a back injury, Franklin went through a series of career ups and downs in the years that followed, ESPN reports.
Despite her career lows, Franklin still retires with 27 medals in international competition, five Olympic gold medals and is the currently world record holder in the 200-meter backstroke.
Franklin wrote in her announcement letter that her retirement is not the end, but "a new beginning."
"Swimming has been, and always will be, a big part of my life and I absolutely plan to stay involved in what I feel is the best sport in the world, just in a different way," she wrote.
Copyright © 2018, ABC Radio. All rights reserved.