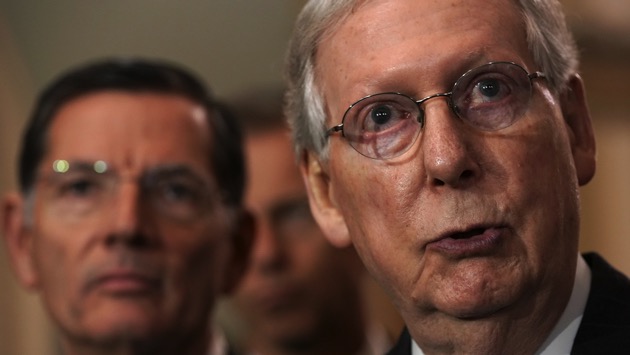 Alex Wong/Getty Images(WASHINGTON) — Senate Majority Leader Mitch McConnell announced a plan Wednesday that appeared all but certain to prevent a government shutdown at the end of the day Friday, allowing lawmakers to go home for the holidays and setting up a short-term spending bill to fund the government until Feb. 8.
"Later this morning, we’ll introduce a continuing resolution that will ensure continuous funding for the federal government. The measure will provide the resources necessary to continue normal operations through February 8th," McConnell said on the Senate floor.
Under the McConnell proposal, the government would be funded until Feb. 8 and Trump would get border security funding at the current level, which does not include money to build a new wall.
"We will turn to a clean continuing resolution later today, so we can make sure we don’t end this year the way we began it — with another government shutdown because of Democrats’ allergy to sensible immigration policies," McConnell said.
The Senate is expected to vote on the measure later Wednesday or possibly Thursday, before sending it to the House. If the House passes it, it will head to the president's desk for his signature.
White House counselor KellyAnne Conway, asked Wednesday whether the president would consider such a measure, said, "He'll take a look at that, certainly." At the same time. Conway denied Trump was "softening his stance" from last week that he would take the blame for a shutdown in order to get border wall funding.
But McConnell's announcement also came with a dig at his colleagues across the aisle.
“I’m sorry that my Democratic colleagues couldn’t put partisanship aside and show the same good-faith flexibility that the President has shown in order to provide the resources our nation needs to secure the integrity of our borders and the safety of American families," McConnell said. "But this seems to be the reality of our political moment. It seems like political spite for the president may be winning out over sensible policy — even sensible policies that are more modest than border security allocations which many Democrats supported themselves, in the recent past."
The Senate's top Democrat, Chuck Schumer, signaled on the floor Wednesday morning that his caucus will support the stopgap measure.
Copyright © 2018, ABC Radio. All rights reserved.