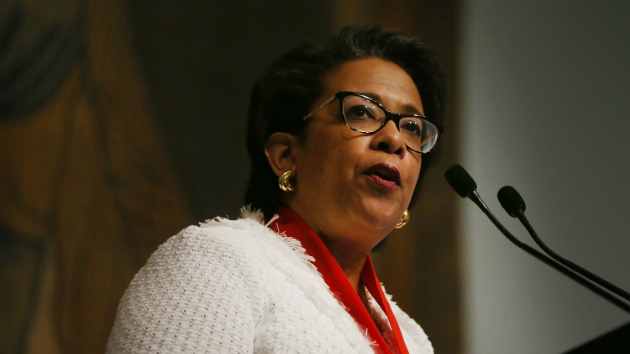 Spencer Platt/Getty Images(WASHINGTON) — Former Attorney General Loretta Lynch appeared before members of the House Judiciary and Oversight committees on Wednesday, as Republicans conclude their months-long investigation into the handling of the FBI’s investigation into former Secretary of State and Democratic presidential candidate Hillary Clinton’s use of a private email server and their separate probe into Russian interference in the 2016 presidential election.
Lynch, who served as attorney general under former President Barack Obama in 2016, was criticized during the presidential campaign for meeting with former President Bill Clinton at an airport as federal investigators reviewed his wife’s use of private email.
The Justice Department Inspector General criticized Lynch’s meeting with Clinton in a review of the FBI’s handling of the Clinton email investigation. She later accepted the findings of the FBI in the investigation, amid backlash over her encounter with the former president.
Former FBI director James Comey has said the meeting prompted his decision to deliver a statement on the findings of the investigation.
Lynch and Comey were each subpoenaed to appear by House Judiciary Committee Chairman Bob Goodlatte, R-Va. She’s likely the last witness to appear before the end of the year, when Republicans will relinquish control of the House to Democrats following the midterm elections.
Comey spent two days behind closed doors with the committees after initially challenging the subpoena and demanding a public interview. The committees later released transcripts of his sessions, which revealed that he defended the bureau from criticism of the investigations and the suggestion that law enforcement officials acted improperly.
“The FBI’s reputation has taken a big hit because the president of the United States with his acolytes, has lied about it constantly,” Comey told reporters Monday after his second session with lawmakers. “I’m very proud of the way the FBI conducted itself. Agile. Flexible, thoughtful. Pursued the leads where you’d want us to.”
On Tuesday, White House press secretary Sarah Sanders claimed that investigators “ambushed” Flynn in an interview at the White House in January of 2017 about his conversations with the Russian ambassador to the United States.
Comey pushed back on a similar suggestion from Republicans, according to the transcript of his session, released Tuesday.
“Why not advise Gen. Flynn of the consequences of making false statements to the FBI?” House Oversight Committee Chairman Trey Gowdy, R-S.C., asked Comey.
"He was an extraordinarily experienced person and so reasonably should be assumed to understand you can't lie to the FBI," Comey said.
Flynn has pleaded guilty to lying to the FBI about his conversations with the Russian ambassador and has cooperated with special counsel Robert Mueller’s probe. A federal judge postponed his planned sentencing on Tuesday at the request of Flynn’s lawyers.
An attorney for Lynch did not respond to a message seeking comment about her upcoming appearance on Capitol Hill.