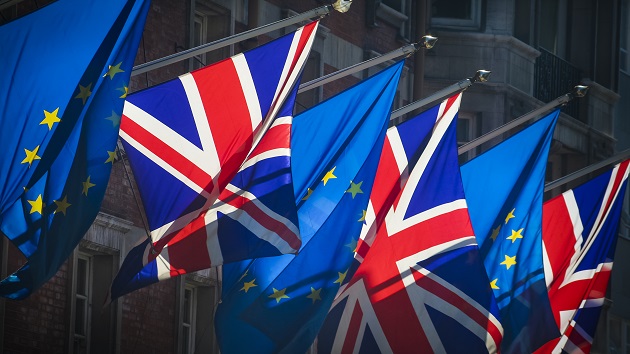 iStock/LanceB(LONDON) — The U.K. government is stepping up its preparations for a "no-deal Brexit," including placing the military on standby. The country has been trying to figure out how to manage a Brexit — wherein the U.K. would leave the European Union — since citizens voted for it in 2016.
"As yet we have not had any formal requests from government departments, but what we are doing is putting contingency plans in place," Defence Secretary Gavin Williamson told the U.K. Parliament on Tuesday. "And what we will do is have 3,500 service personnel held at readiness, including regulars and reserves in order support any government department on any contingencies they may need."
Prime Minister Theresa May has been negotiating a deal with the EU since June 23, 2016, when Britain voted to leave in a referendum delivered by the ruling Conservative Party.
A no-deal Brexit would involve leaving the EU on the March 29 deadline with no agreement on the future trade and security relationship between the U.K. and the EU. The announcement was made as the future of the Brexit deal May has negotiated with the EU looks increasingly uncertain.
"To be absolutely clear, no formal requests have been made to deploy forces in the event of a no-deal Brexit," a government spokesperson told ABC News. "The Ministry of Defence routinely undertakes contingency planning and as part of this, the department has taken the step of putting 3,500 regular and reserve personnel on standby in the UK. We do not expect or intend for these personnel to be used."
The prime minister has delayed a parliamentary vote on the deal until after Christmas and recently survived a vote of no-confidence from disgruntled MPs within her own party. If the deal is voted down in Parliament, there is a higher chance that the U.K. will leave the EU without a deal.
Chancellor Phillip Hammond also provided a further £2 billion worth of funding towards Brexit preparations for all possible outcomes.
"Since 2016, the chancellor has already provided £4.2 billion towards Brexit preparations to ensure we are ready for all scenarios," the government spokesperson said. "£2 billion of that funding for 2019/2020 will be allocated shortly."
Businesses 'watching in horror'
As well as placing the military on standby, the government will send new advice packs to 80,000 businesses on how to plan for a no-deal Brexit on Friday.
With 100 days to go until the Brexit deadline, the government's announcements coincided with a joint statement issued by five leading business groups — the British Chambers of Commerce, the Confederation of British Industry, the Institute of Directors, the Federation of Small Businesses, and the EEF Manufacturers’ Association — that said "businesses have been watching in horror" as the prospect of a no-deal Brexit increases.
"Businesses of all sizes are reaching the point of no return, with many now putting in place contingency plans that are a significant drain of time and money," the statement said.
"Firms are pausing or diverting investment that should be boosting productivity, innovation, jobs and pay, into stockpiling goods or materials, diverting cross border trade and moving offices, factories and therefore jobs and tax revenues out of the U.K. While many companies are actively preparing for a 'no-deal' scenario, there are also hundreds of thousands who have yet to start -– and cannot be expected to be ready in such a short space of time."
"With just 100 days to go, the suggestion that 'no-deal' can be 'managed' is not a credible proposition," they added.
'A safety measure against the crash'
ABC News spoke to senior government minister Amber Rudd, the secretary of state for work and pensions, who said that while preparations were being made, leaving the EU without a deal was not the government’s intention.
"The government is stepping up its preparations for no-deal. Our position is unequivocally that we’re seeking to make sure we do get a deal but that there is a precautionary contingency plan for no-deal," she said.
"At Cabinet yesterday, I referred to no-deal planning as similar to the seat belt one would put on when in a car -– it’s a safety measure against the crash, not an objective to actually crash the car! My view is that a no-deal Brexit would be bad for the country and bad for business so I am committed, like the rest of Cabinet are, to supporting the Prime Minister’s deal so we avoid this."

Supply chain problems forcing small businesses to change how they operate
Shudder spotlighting Black filmmakers and writers for Halloween with ‘Horror Noire’
Just in time for Halloween, Netflix’s ‘The Movies That Made Us’ takes a stab at three horror classics
It’s that time of year: ‘The Simpsons’ “Treehouse of Horror” returns Sunday
Biden touts vaccine mandates for large businesses: ‘These requirements work’
Kieran Culkin reflects on watching brother Macaulay get harassed by fans when they were younger