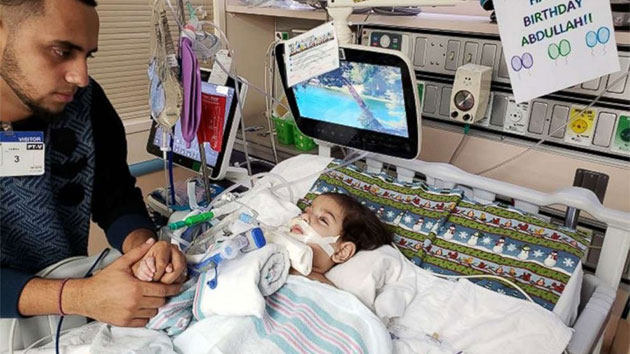 CAIR, Sacramento Valley (SAN FRANCISCO) — A mother who had been blocked from seeing her terminally ill child due to Trump's travel ban has been granted a visa waiver, advocates said Tuesday.
Shaima Swileh's 2-year-old son, Abdullah, has a genetic brain condition that has continued to worsen, according to the Council on American-Islamic Relations' Sacramento Valley chapter, which filed a writ of mandamus to try to help her get an expedited visa.
Abdullah and his father, Ali Hassan, are both U.S. citizens and came to the U.S. so he could receive treatment at the University of California San Francisco's Benioff Children's Hospital in Oakland a few months ago, according to CAIR. Swileh is currently in Egypt, according to Hassan, and has not seen her husband or son since they arrived in the U.S. After having submitted multiple requests for her visa waiver to be expedited, she is expected to arrive at San Francisco International Airport Wednesday, according to CAIR.
"This is the happiest day of my life," Ali Hassan said in a statement, thanking both CAIR and the hospital staff.
"This will allow us to mourn with dignity," he added.
Swileh had been barred from traveling to the U.S. to see her son because she is from Yemen, one of the countries the Trump administration has restricted travel from indefinitely.
On Thursday, CAIR's Sacramento Valley chapter tweeted that a visa waiver had been granted for Swileh and that the organization is working on "getting her here ASAP."
On Monday, religious and civil rights leaders gathered with Hassan at CAIR's office in Sacramento to demand Swileh be allowed to see her son before he is taken off life support, ABC San Francisco affiliate KGO-TV reported.
"My wife is calling me every day wanting to kiss and hold our son for one last time," Hassan said during the press conference. "Time is running out, please help us get my family together again."
The hospital where Abdullah is being treated told KGO in a statement that it supports the family's efforts to reunite, and in the meantime the staff would continue to do everything they could to keep Abdullah comfortable and support the family.
Three California Democratic House members, Rep. Doris Matsui, Rep. Jerry McNerney and Rep. Barbara Lee, wrote a letter to Secretary of State Mike Pompeo on Monday, requesting that the State Department expedite its decision regarding Swileh's visa waiver.
CAIR Sacramento Valley's civil rights attorney, Saad Sweilem, denounced the delay in granting Swileh a visa in a statement Monday.
"The loss of a child is something no parent should experience, but not being able to be there in your child's last moments is unfathomably cruel," Sweilem said in the statement.
Sweilem, who is representing the family, also asked for privacy when Swileh arrives.
"She is a grieving mother who hasn't seen her child in months," Sweilem said in a statement.
The organization had also launched an online petition in support of Swileh that had garnered more than 10,000 signatures.
A spokesperson for CAIR did not immediately respond to ABC News' request for comment Tuesday.
In June, the U.S. Supreme Court upheld Trump's travel ban, which restricts most travel to the U.S. from Yemen, Chad, Iran, Iraq, Libya, North Korea, Syria and Venezuela. Civil rights groups have denounced the policy as a "Muslim ban," since many of the countries on the list are Muslim majority.
A State Department spokesperson declined to comment on Swileh’s case Tuesday, citing the confidentiality of visa records.
"Department of State makes every effort to facilitate legitimate travel by international visitors. We are also fully committed to administering U.S. immigration law and ensuring the integrity and security of our country’s borders,” the State Department spokesperson told ABC News. “Applicants who are ineligible to receive a visitor visa under U.S. immigration law may apply for humanitarian parole from the Department of Homeland Security."
Copyright © 2018, ABC Radio. All rights reserved.