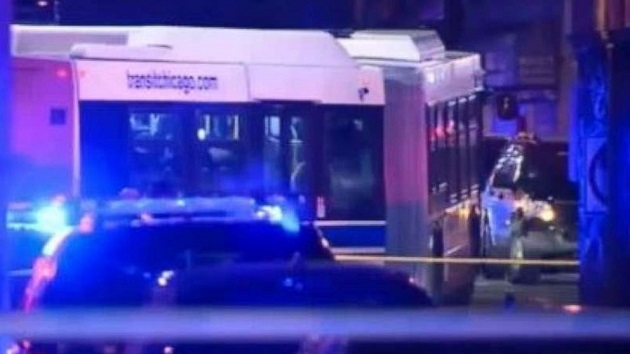 WLS-TV(CHICAGO) — The Chicago Police Department is mourning two of its officers who were hit and killed by a train while chasing a suspected gunman Monday night, officials said.
Eduardo Marmolejo, 37, and Conrad Gary, 31, were chasing the suspect around 6 p.m. when they were hit by a train that may have been traveling 70 mph, Chicago Police Superintendent Eddie Johnson told reporters.
The officers, both fathers of young children, died at the scene, Johnson said.
The two officers were killed "doing the most dangerous thing any police officer can do, and that is to chase an individual with a gun," Johnson said.
Bodycam video showed the officers get out of their car, head up to the tracks and talk about where the suspect may have gone, police said, according to ABC Chicago station WLS-TV.
One loud train approached, which may have masked the sound of a second train, police said, according to WLS. Then the camera went to black, WLS-TV said.
A suspect was apprehended and a weapon was recovered, police said.
"These brave young men were consumed by identifying a potential threat to their community and put the safety of others above their own," Johnson said.
Gary had been on the force for 18 months and Marmolejo for two years, Chicago Police Department officials said.
Gary was a married father of an infant while Marmolejo was a married father of three children, WLS-TV reported.
"We are all mourning the loss of our extended family," Chicago Police officials told ABC News via email. "However, our officers continue to protect and serve their communities, even in the most difficult of circumstances."
"This knocks you back on your heels," Chicago Mayor Rahm Emanuel told reporters.
"There are no words to express our grief, our sense of loss," Emanuel said. "We as a city have to measure up and remind them, they're part of our family."
Gary and Marmolejo's deaths are the third and fourth for the Chicago Police Department this year.
In November, Chicago police officer Samuel Jimenez was fatally shot in the neck while trying to protect employees and patients during a shooting at Chicago's Mercy Hospital.
In February, Chicago police Cmdr. Paul Bauer was shot and killed. Bauer, survived by his wife and daughter, had been sitting in his squad car when heard a call over the radio and pursued a gunman on foot.
The mayor on Tuesday urged Chicago residents to show the police department that it has "your support."
"When you think about Commander Bauer, officer Jimenez, you think now about Eduardo [and] Conrad," he said. "The Chicago Police Department needs the family of Chicago. … We have a responsibility today to show up for them."
Other police departments have been offering their condolences for the latest slain Chicago officers, who were members of the department's fifth district.