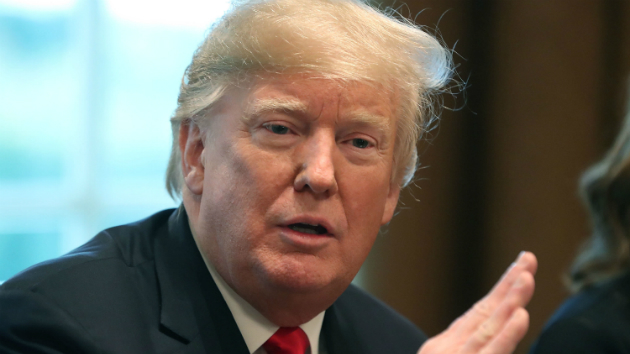 Mark Wilson/Getty Images(WASHINGTON) — President Donald Trump tweeted a message of well wishes to retired Lt. Gen. Michael Flynn ahead of his appearance in a federal court Tuesday where he will be sentenced for lying to federal investigators about his contacts with Russian officials.
"Good luck today in court to General Michael Flynn," Trump tweeted just hours before Flynn's scheduled court appearance. "Will be interesting to see what he has to say, despite tremendous pressure being put on him, about Russian Collusion in our great and, obviously, highly successful political campaign."

Good luck today in court to General Michael Flynn. Will be interesting to see what he has to say, despite tremendous pressure being put on him, about Russian Collusion in our great and, obviously, highly successful political campaign. There was no Collusion!

Flynn is the first former member of the Trump administration to be sentenced as a part of special counsel Robert Mueller's investigation into Russian interference in the 2016 election and possible collusion by members of Trump's campaign.
While he could face nearly as much as six months in prison, Flynn is not expected to serve any time in part due to a sentencing memo filed by Mueller just last week that stated Flynn provided "substantial assistance" in his interviews with the special counsel since his guilty plea.
"Given the defendant’s substantial assistance and other considerations set forth, a sentence at the low end of the guideline range—including a sentence that does not impose a term of incarceration—is appropriate and warranted,” Mueller wrote.
Flynn served a total of 23 days as Trump's national security adviser before his sudden firing in February 2017, after he was found to have lied to Vice President Mike Pence and other top White House officials about whether he had discussed lifting sanctions against Russia with its ambassador during the transition.
Trump has since repeatedly stated that he believes Flynn was unfairly targeted by Mueller's investigation and has even suggested he no longer believes Flynn actually lied to FBI agents despite his guilty plea, as he did in this tweet from Dec. 13.

They gave General Flynn a great deal because they were embarrassed by the way he was treated – the FBI said he didn’t lie and they overrode the FBI. They want to scare everybody into making up stories that are not true by catching them in the smallest of misstatements. Sad!……

Flynn is not expected to recant his admission to lying to the FBI, though in a sentencing memo last week, Flynn's attorney Robert Kelner accused the FBI of being manipulative and potentially deceitful in how its agents approached Flynn initially.
The special counsel's office responded to the allegations in court documents Friday, where it argued that Flynn's years of military service should essentially have taught him not to lie to federal investigators.
“Nothing about the way the interview was arranged or conducted caused the defendant to make false statements to the FBI,” the special counsel's office said. “The defendant chose to make false statements about his communications with the Russian ambassador weeks before the FBI interview, when he lied about that topic to the media, the incoming Vice President, and other members of the Presidential Transition Team.”
Copyright © 2018, ABC Radio. All rights reserved.