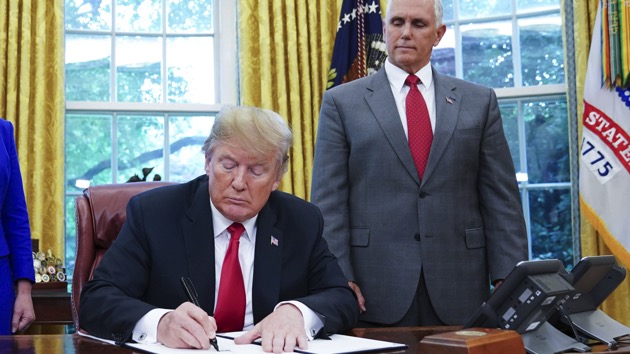 MANDEL NGAN/AFP/Getty Images(WASHINGTON) — President Donald Trump signed a memorandum on Tuesday establishing U.S. Space Command as the military's 11th unified combatant command.
While the new command is distinct from the "Space Force" military service that Trump has said he wants to create and the existing Air Force Space Command, it will change how the Department of Defense approaches war-fighting in space by centralizing its space operations from across the U.S. military into one place, to counter threats from China and Russia.
Like the military's other combatant commands, Space Command — which was announced by the administration earlier this year — will be led by a four-star general and draw on capabilities and personnel from the Air Force, Army, Marine Corps and Navy.
The memorandum directs Defense Secretary James Mattis to recommend officers for nomination and Senate confirmation to serve as the commander and deputy commander. Unlike the creation of a military service, the establishment of Space Command won't require Congressional legislation.
The White House released the memo while Vice President Mike Pence was at the John F. Kennedy Space Center in Cape Canaveral, Florida for the SpaceX launch of an Air Force GPS satellite. The launch was delayed until Wednesday because sensors in the rocket stopped the countdown.
Despite the launch's delay, Pence made remarks about the new command. He said that with its establishment “a new era of American national security in space begins today."
Pence also announced that Trump would sign a new "space policy directive" in the coming days to create the sixth branch of the armed forces, called Space Force, that the administration hopes to stand up before the end of 2020.
Trump first spoke about a future space force in March, but officially directed the Department of Defense to begin the process to establish the new military branch in June. Since then, Pentagon officials have been developing options for how a future Space Force could be structured.
One option is for the service to be housed under the Department of the Air Force, similar to the way in which the Marine Corps falls under the Department of the Navy, a U.S. official told ABC News. Currently, the Air Force manages a three-star Space Command, headquartered at Peterson Air Force Base in Colorado responsible for 30,000 personnel worldwide.
But it's unclear if Trump would approve such a plan.
In June, the president said, "We are going to have the Air Force, and we are going to have the Space Force — separate but equal."
Ultimately, the final decision will require legislation from a Congress which has been divided for years over how the military should or shouldn't restructure to counter threats from China and Russia in space.
The incoming Chairman of the House Armed Services Committee Rep. Adam Smith, D-Washington, has already expressed his opposition to the creation of a separate service because of its cost.
The Air Force has estimated that a Space Force could cost as much as $13 billion over the first five years. But Deputy Secretary of Defense Patrick Shanahan has said it could be less than $5 billion.
Copyright © 2018, ABC Radio. All rights reserved.

$28M is winning bid for seat aboard Blue Origin’s 1st human space flight
Caitlyn Jenner says she wants to be ‘a thoughtful disrupter’ like Trump
AG Garland defends DOJ decision to continue to back Trump in E. Jean Carroll defamation case
Merck signs $1.2 billion deal with US government for experimental COVID treatment
Police did not clear Lafayette Park area so Trump could hold ‘Bible’ photo op: Watchdog
Amazon activates internet-sharing service ‘Sidewalk:’ What to know and how to turn it off