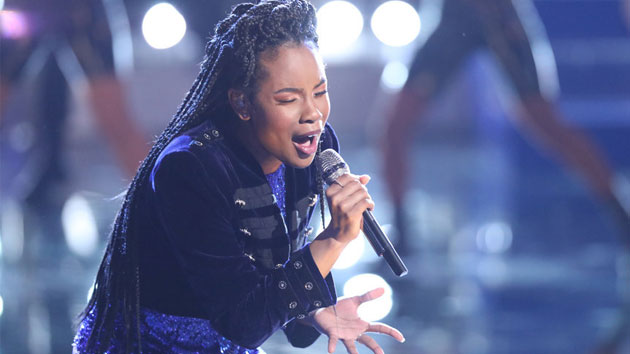 Kennedy Holmes performs on "The Voice"; Tyler Golden/NBC(NEW YORK) — The top four on The Voice took the stage Monday night for part one of the season 15 finals, with a record contract on the line.

Team Blake Shelton's Chris Kroeze and Kirk Jay, Team Jennifer Hudson’s Kennedy Holmes and Team Kelly Clarkson’s Chevel Shepherd all performed three times. Adam Levine has no artists left on his team. Each artist performed a cover song, a duet with his or her coach, and an original song.

Kroeze led off with a cover of Lynyrd Skynyrd’s “Sweet Home Alabama,” with his coach Blake Shelton explaining the selection as the kind of iconic song people have come to love from the artist. Following the performance, Adam and Kelly noted that Chris doesn’t get enough credit for being a “legit amazing guitar player.” Blake praised him for knowing what he wants to do and how to connect with the audience.

Team Kelly’s Chevel Shepherd showed off her bluesy side on Tanya Tucker’s “It’s a Little Too Late.” Addressing the camera during rehearsals, Kelly declared Shepherd “might be 4' 10, but she’s coming for you country music.” Following Chevel’s live performance, Clarkson, called her “the best kind of artist to work with,” because she has fun “learning and challenging” herself.

Kirk Jay debuted an emotional new single, “Defenseless.” Blake was pleased with the song choice, noting it was a straight-forward, simple song with a great message. Jennifer said Kirk made her a country fan. Blake followed with “Welcome to the country music family, you’re the real deal.”

Kennedy Holmes, the youngest contestant in the competition at 14, followed with her original song, “Love Is Free.” Her coach, Jennifer Hudson, described it as an inspiring tune that Kennedy had to make sure she was “owning” it and “believed in” what she was saying. JHud hailed Kennedy as a performer who’s coming in to her own artistry and enjoying herself in the process.

Next, Kirk Jay joined his coach Blake Shelton for a cover of George Strait’s classic, “You Look So Good in Love.”

Team Blake’s Chris Kroeze followed with his original tune, “Human,” which Blake described as a song with a timely message — we’re all human. He also felt it was a song that could show Chris’ diversity as an artist. Shelton hailed the live performance as “a moment” for Kroeze.

Chevel and Kelly, or “Chavelly,” as they referred to themselves, followed with a duet on The Judds’ “Rockin’ with the Rhythm of the Rain.”

Chris and Blake returned next with their duet, Delbert McClinton’s “Two More Bottles of Wine.”

Team Blake’s Kirk Jay came “full circle,” according to Shelton, tackling Rascal Flatts’ “I Won’t Let Go” for his final performance of the night. Addressing the camera during rehearsals, Shelton declared Kirk “has a real shot at a big career,” adding that he's, “somebody we can hear on country radio tomorrow.” Adam gave kudos to Kirk for tacking a tough song, and having a voice that “stands out.” Blake called the performance “Brilliant.”

Team Jennifer’s Kennedy Holmes closed out the show with her cover tune, bringing down the house with Demi Lovato’s “Confident,” Jennifer said it “represents everything it takes to get this far.” Hudson called the 14-year-old “a true professional” — for her dance moves, as well as her voice — declaring, “I thought Beyoncé was up there.

The winner will be crowned on Tuesday night's two-hour The Voice season finale, which begins at 8 p.m. ET on NBC. Rascal Flatts, Panic! at the Disco, Dan + Shay, Dierks Bentley, Halsey, John Legend, Esperanza Spalding, Kelly Rowland, The Doobie Brothers, Marshmello and Bastille, Jennifer Hudson and Kelly Clarkson, and last season's winner of The Voice, Brynn Cartelli, will be the musical guests.

Biden-Putin summit live updates: High-stakes meeting begins
Allius Barnes promises a “really great moment between Vince and Ben” in the season finale of ‘Cruel Summer’
“The Bachelorette” recap: Katie lays down the law after learning some of the men may be playing her
‘Keeping Up with the Kardashians’ series finale: Kim opens up about divorce from Kanye West, “It’s the little things”
Naya Rivera’s father details their heartbreaking final FaceTime call
Regé-Jean Page teases fans for misremembering the iconic “I burn for you” line