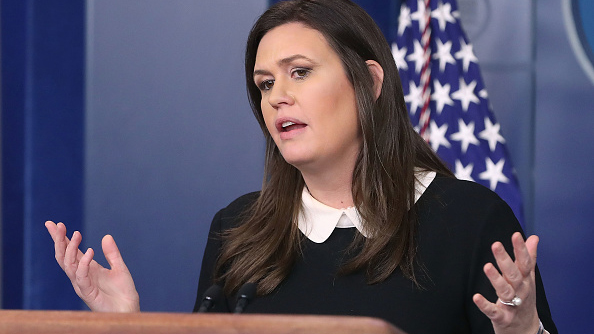 Mark Wilson/Getty Images(WASHINGTON) — White House press secretary Sarah Sanders is standing by a claim that FBI investigators "ambushed" the then-national security adviser Michael Flynn during an interview in January of last year.
“We don’t have any reason to want to walk that back,” Sanders said in Tuesday's White House press briefing.
Her comments came shortly after Flynn's appearance in a federal court where he was slated to be sentenced for lying to federal investigators about his contacts with Russian officials. During the hearing, Flynn took full responsibility for lying to the FBI and his admitted that he knew doing so was illegal.
When asked by Judge Emmet Sullivan if Flynn believed he had been entrapped by the FBI, his attorneys replied "no your honor."
Flynn has pleaded guilty to lying to the FBI regarding his contacts with the ambassador of Russia and conversations related to sanctions on Russia.
His sentencing was delayed at the request of his defense attorney. The next status report is now set for March.
Sanders also defended President Donald Trump's tweeted well-wishes for Flynn earlier in the day and said the White House is not concerned with Flynn's legal proceedings as it relates to the president.
"Not when it comes to things having to do with the president, the activities he is said to – we'll let the court make that determination – that he's said to have engaged in don't have anything to do with the president," Sander said when asked if the White House had concerns that one of the president's top aides lied to the FBI and had done work for a foreign government.
"Good luck today in court to General Michael Flynn," Trump tweeted just hours before Flynn's scheduled court appearance. "Will be interesting to see what he has to say, despite tremendous pressure being put on him, about Russian Collusion in our great and, obviously, highly successful political campaign."
In an appearance on FOX News later in the morning, Sanders accused the FBI of "ambushing" Flynn with how he was approached for an interview.
"They threw FBI protocol out the window for one reason and one reason only: because it was the Trump administration and they thought they could get away with it," Sanders said.
Flynn could ultimately face up to six months in prison, though Mueller's team has recommended no jail time, citing Flynn's "substantial assistance" in his interviews with the special counsel since his guilty plea.
"Given the defendant’s substantial assistance and other considerations set forth, a sentence at the low end of the guideline range—including a sentence that does not impose a term of incarceration—is appropriate and warranted,” Mueller wrote.
Flynn served a total of 23 days as Trump's national security adviser before his sudden firing in February 2017 after he was found to have lied to Vice President Mike Pence and other top White House officials about whether he had discussed lifting sanctions against Russia with its ambassador during the transition.
Trump has since repeatedly stated that he believes Flynn was unfairly targeted by Mueller's investigation and has even suggested he no longer believes Flynn actually lied to FBI agents despite his guilty plea, as he did in this tweet from Dec. 13.
In a sentencing memo last week, Flynn's attorney Robert Kelner accused the FBI of being manipulative and potentially deceitful in how its agents approached Flynn initially.
The special counsel's office responded to the allegations in court documents Friday, where it argued that Flynn's years of military service should essentially have taught him not to lie to federal investigators.
“Nothing about the way the interview was arranged or conducted caused the defendant to make false statements to the FBI,” the special counsel's office said. “The defendant chose to make false statements about his communications with the Russian ambassador weeks before the FBI interview when he lied about that topic to the media, the incoming Vice President, and other members of the Presidential Transition Team.”
On Monday evening the government filed the FBI's formerly secret internal report based on two investigators' interview with Flynn on Jan. 24, 2017.
The February 2017 document, called a "302" in FBI parlance, shows how the agents went into the meeting armed with knowledge of conversations Flynn had during the transition period after the election with Russian Ambassador Sergey Kislyak, including calls and text messages they exchanged in the U.S. and while Flynn and his wife were on vacation in the Dominican Republic.
The report shows Flynn repeatedly said "no" or didn't remember when they asked him specific questions about his contacts with Kislyak on the subject of a UN vote on Israeli settlements the Obama administration abstained from and sanctions the Obama White House imposed on Russia for interfering with the 2016 presidential election.
The reason the judge ordered the 302 placed on the public docket was that Flynn's legal team raised the question in their sentencing memo to the judge of whether FBI agents tried to lay a perjury trap on Flynn. The government, in response, said, "When the defendant said he did not remember something they knew he said, they used the exact words the defendant had used in order to prompt a truthful response."
Judge Sullivan said the report is "relevant to Mr. Flynn's sentencing," though he did not indicate how it will factor into his ruling on Flynn's sentence.