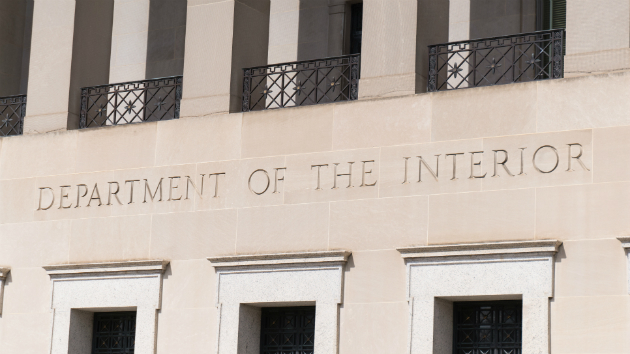 pabradyphoto/iStock(WASHINGTON) — Conservation activists and Democrats have said they want to focus on political appointees at the Interior Department who are expected to continue carrying out President Donald Trump's agenda after Secretary Ryan Zinke leaves his post at the end of the year.
Over the weekend, Trump announced on Twitter Zinke would resign amid ethics investigations and promises for aggressive oversight from Democrats in January.
But Zinke's departure isn't expected to lead to a drastic shift in priorities for the department, which is charged with managing the nation's natural resources and cultural heritage.
Zinke generated headlines about ethics investigations and news that one of those investigations was referred to the Justice Department by Interior's inspector general. Zinke vehemently denied any wrongdoing, but said in a statement that he could not justify the cost of defending himself and his family, though he did not specify if he meant the ethics investigations or expected oversight from the Democratic House.
Conservation advocates say they were initially optimistic about Zinke because he previously defended public lands and pledged to follow in President Teddy Roosevelt's footsteps.
Roosevelt used his authority to establish 150 national forests, 51 federal bird reserves, four national game preserves, five national parks and 18 national monuments on more than 230 million acres of public land, according to an Interior blog. But advocates were ultimately disappointed by his support for Trump's "America First" agenda, which included expanding energy production on federal land and rolling back regulations, such as rules to protect endangered species and migratory birds.
Collin O'Mara, president of the National Wildlife Federation and former Delaware secretary of natural resources, said he worked with Zinke when he was in Congress and that he supported him for the job, but that Zinke ultimately chose Trump's call for energy dominance over conservation.
"Zinke's most lasting legacy will be the millions of acres of public lands degraded, the climate pollution increased, the outdoor recreational opportunities forsaken, the national monuments decimated and the wildlife species imperiled by an all-consuming energy-dominance agenda that irreparably violated President Theodore Roosevelt's 'great central task of leaving this land even a better land for our descendants than it is for us,'" O'Mara wrote in a Washington Post op-ed.
Conservation groups point out that Zinke led the efforts to shrink two national monuments in Utah and expand mining and energy production on public lands in support of the president's agenda.
Zinke has also pushed for his agency to be more involved at the border, touting a dramatic increase in arrests on public lands earlier this year. The agency has also worked on a joint opioid task force to increase enforcement and training on Native American reservations and has emphasized a bipartisan effort to direct more money to resolve a backlog of maintenance projects at national parks.
The Interior Department did not respond to a request for an interview from ABC News on Monday.
Some groups have already turned a critical eye to Deputy Secretary David Bernhardt, who is expected to take the lead at Interior until a new secretary is confirmed. Democrats in Congress who pledged to investigate Zinke now say they plan to call Bernhardt and any nominee for Interior secretary to testify on whether industry groups are being given too much influence on policy decisions.
"Deputy Secretary Bernhardt's conflicts of interest are well known. His years of lobbying on behalf of clients who stand to profit from Interior policy decisions are cause for serious concern. We intend to continue conducting vigorous oversight of how Interior political appointees arrive at major policy decisions, who they consult, who they ignore, and who stands to benefit financially," Rep. Raul Grijalva, ranking member of the House Natural Resources Committee, said in a statement.
Activists said they will be watching closely whomever Trump nominates to replace Zinke. Jamie Rappaport Clark, president and CEO of the Defenders of Wildlife, said she expects a "massive uprising" if Bernhardt is nominated because of his connections to industry groups.
"There's not one of the names that we're hearing that has any bona fides to lead a department of this magnitude and of this importance," she said in an interview.
Bernhardt held several positions at Interior between 2001 and 2009 before being nominated by Trump last April. As deputy secretary he works as chief operating officer of the department, according to its website.
He previously worked as an energy lobbyist and critics have accused him of meeting with former clients since taking office despite recusing himself from projects that would be a conflict of interest.
Trump's nominee to take Zinke's place at Interior will be vetted by the Senate Energy and Natural Resources Committee, led by Republican Sen. Lisa Murkowski and Democrat Sen. Joe Manchin. Trump tweeted that he would announce his nominee to replace Zinke this week.
Copyright © 2018, ABC Radio. All rights reserved.