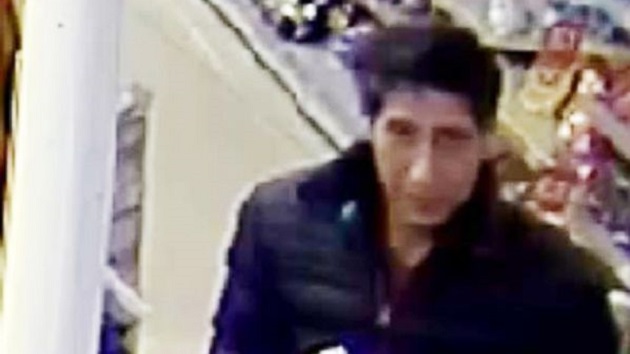 Blackpool Police(LONDON) — Police in England are once again searching for a suspect with an uncanny resemblance to the Friends character Ross Geller.
Abdulah Husseini, who has been accused of stealing from a restaurant, did not show up for his court date Tuesday.
A district judge has now issued a warrant for his arrest.
The case went viral after police in Blackpool, England, appealed for help in the alleged theft of a coat, cellphone and wallet from a restaurant in Blackpool on Sept. 20. Social media users were quick to point out that the suspect looked like American actor David Schwimmer, who played Ross Geller on Friends.
The original Facebook post from Blackpool police showing an image of the suspect carrying what appears to be a crate of beer has received nearly 100,000 comments and has been shared over 50,000 times.
“Do you recognize this man? We want to speak to him in relation to a theft at a Blackpool restaurant,” police said in the post.
This prompted Schwimmer to officially rule himself out as a suspect by sharing a parody video on Twitter, where he is seen recreating the photo.
"Officers, I swear it wasn't me," he wrote. "As you can see, I was in New York. To the hardworking Blackpool Police, good luck with the investigation."
On Oct. 24, Blackpool police thanked the actor for clarifying the situation.
“Thanks for being there for us David Schwimmer,” police said in a Facebook post. “We appreciate your support!”
Copyright © 2018, ABC Radio. All rights reserved.