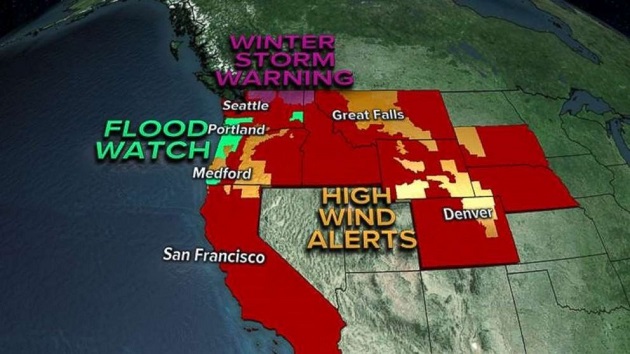 ABC News(NEW YORK) — A series of storms are slamming the West Coast with heavy rain, huge waves, strong winds and snow at higher elevations.
In central and northern California on Monday, waves were as high as 30 feet, with 40- to 50-foot breaks. Coastal flooding and erosion were reported.
An even more powerful storm is hitting the region Tuesday, prompting flood watches, high-wind alerts and winter storm warnings across nine states.
Travelers along Interstate 5 on Tuesday, from Washington state to Northern California, will get drenched and should be on the look out for potential flooding. Those traveling along I-90 or I-84 east of Seattle and Portland, Oregon should expect to see heavy snow in mountain passes.
The strong storm system likely will move over the Rockies on Wednesday and redevelop in the Plains before moving toward the Southeast and East Coast by the end of the workweek. More flooding in those areas is a distinct possibility.
Florida may see severe storms on Thursday, especially in the central and southern part of the state, with the possibility for damaging winds and a few tornadoes.
Some parts of the East Coast could see 3 inches of rain by the end of the week, with already saturated areas, including the Carolinas, prone to possible flooding.