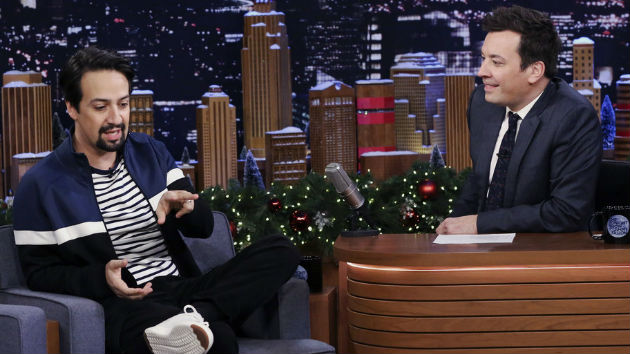 Following his monologue, the Tonight Show host — sitting at his desk — began explaining to the audience that as much as he's enjoyed the hits of the past year, there's nothing he loves more than holiday music. Miranda suddenly jumped out from behind the curtain and interrupted Fallon with an idea, although Jimmy already knew what the Hamilton star had in mind.

"Are you saying that we should sing a medley of popular songs of 2018, but change the lyrics to make them about the holiday season?

The two then launched into a medley of the years biggest hits, including, Camila Cabello's "Havana," which became a song about mall Santas; Zed, Maren Morris and Grey's "The Middle," now a ditty about spinning a dreidel; Ariana Grande's "No Tears Left to Cry," a song about getting drunk on wine; and Cardi B, Bad Bunny and J Blavin's "I Like It," a tribute to all the things they like about Christmas, such as chestnuts, chimneys, candy canes and "chillin' with my squad."

Other songs getting the holiday treatment were Maroon 5's "Girl Like You"; Migos' "Stir Fry"; Shawn Mendes' "In My Blood"; Post Malone's "Better Now"; Bebe Rexha and Florida Georgia Line's "Meant to Be"; and "Perfect," by Ed Sheeran.