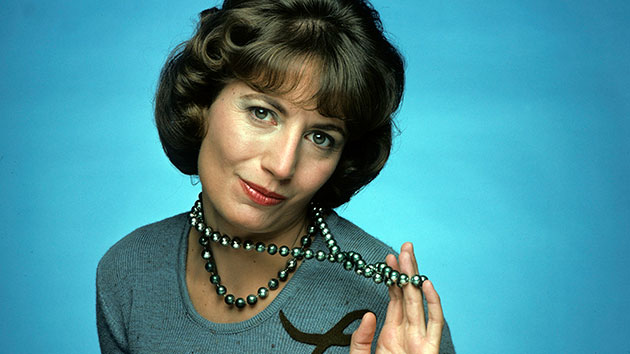 ABC Photo Archives/ABC via Getty Images(LOS ANGELES) — Actress and director Penny Marshall, best known for her starring role as Laverne DeFazio on the beloved '70s sitcom Laverne & Shirley, has died. Her family said in a statement that she passed away peacefully in her Hollywood Hills home Monday night due to complications from diabetes. She was 75.

Born Carole Marshall, she was the sister of TV producer, writer and director Garry Marshall, who died in 2016. It was he who gave her her first break in showbiz, casting her in his 1968 movie How Sweet It Is. In 1971, Garry made her a semi-regular on his show The Odd Couple, playing Myrna Turner, Oscar Madison's secretary.

Also in 1971, Marshall married All in the Family star Rob Reiner, and was considered for the role of his character's wife, Gloria Bunker Stivic, but she lost the part to Sally Struthers.

In 1975, Garry Marshall cast Penny as Laverne DeFazio and Cindy Williams as Shirley Feeney on his show Happy Days, in an episode called "A Date with Fonzie." The studio audience loved the tough-talking brewery worker characters so much that Marshall spun them off into their own show, Laverne & Shirley. It was a hit, running from 1976 to 1983.

Garry Marshall also encouraged Penny to become a director, which she did, starting with episodes of Laverne & Shirley and other shows, then moving on to films. Her resume includes the comedy hits Big and A League of their Own, as well as Jumpin' Jack Flash, The Preacher's Wife, Riding in Cars with Boys and Awakenings, the latter of which which earned her an Academy Award nomination for Best Picture. Big, starring Tom Hanks, was the first movie directed by a woman to earn over $100 million at the box office.

In 2012, Marshall published a memoir, My Mother Was Nuts, in part to counteract false reports about her health, following a battle with lung cancer.

Marshall is survived by a sister, a daughter and three grandchildren. Her publicist says a "celebration of her life will be held at a later date to be announced."

Laverne Cox says she will “never ever” have children of her own
Laverne Cox on why she ‘never’ wants to be a parent
Steven Yeun, Laverne Cox, Andra Day among 395 new Academy members
Universal Pictures International apologizes after Laverne Cox’s voice dubbed by a man in Italy’s trailer for ‘Promising Young Woman’
“Excited” Laverne Cox to replace Giuliana Rancic Rancic as E!’s red carpet host
Laverne Cox is taking it “a day at a time” to mentally recover from transphobic attack