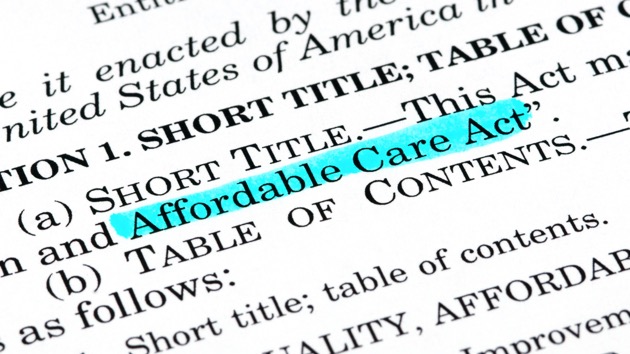 Ellenmck/iStock(WASHINGTON) — A federal judge’s ruling late Friday striking down the Affordable Care Act in its entirety has stoked anxiety among millions of Americans who rely on subsidized health insurance and millions more who have pre-existing conditions.
Even if you don’t have an Obamacare health plan, experts say there are far-reaching implications for all consumers if the decision is allowed to stand.
Here’s what you need to know:

What does the federal court ruling mean?
Federal Judge Reed O'Connor of the Northern District of Texas declared the individual mandate of the Affordable Care Act unconstitutional and, as a result, the entire law invalid. If the decision stands, it would wipe out all aspects of Obamacare, including protections for pre-existing conditions, preventive benefits coverage in all plans, mandate that children can remain on their parents’ plans up to age 26, expansion of Medicaid, premium subsidies and efforts to phase out the prescription drug donut hole in Medicare.
O’Connor issued a stay on his decision – meaning, it will not immediately take effect – while supporters of the ACA appeal the ruling to higher courts.

Didn’t the Supreme Court already uphold Obamacare in 2012?
Yes. In 2012, the Supreme Court reasoned that while government cannot order citizens to buy something, Obamacare’s "shared-responsibility payment" (a.k.a. penalty) for not having an insurance plan effectively amounts to a tax, which is an acceptable government practice.
Last year, however, congressional Republicans – unsuccessful in their bid to repeal and replace Obamacare – moved to eliminate the individual mandate in effect. The Tax Cuts and Jobs Act of 2017 reduced the shared-responsibility payment to zero, effective January 1, 2019. In other words, the government will no longer financially penalize, or tax, people who don’t buy insurance.
Judge O’Connor reasoned that because the individual mandate will no longer collect revenue, it is no longer considered a tax. He concluded it is “impermissible under the Interstate Commerce Clause—meaning the Individual Mandate is unconstitutional."

Does the ruling mean people will immediately lose benefits?
No. Because Judge O’Connor stayed his decision, nothing will change immediately as appeals proceed. If you have an Obamacare plan, it remains valid and any premium subsidy received will continue. Insurers are still forbidden from denying coverage or charging higher premiums for people with pre-existing conditions. All insurance plans are still required to provide a basic standard of benefits without lifetime caps as the law states.

What happens next?
A group of Democratic state attorneys general led by California plans to appeal the decision to the 5th Circuit US Court of Appeals in New Orleans. That process is expected to take several months. Ultimately the case is expected to land at the US Supreme Court within the next couple of years.

What is Plan B if the entire law is struck down?
It's up to Congress to enact an Obamacare alternative if the courts strike down the ACA, and we've seen the gridlock on that front. There is not currently a viable alternative to the law that can pass the House and Senate and get signed into law by President Trump. Republicans were unsuccessful at repealing and replacing the law in 2017 when they controlled both chambers and the White House.
While President Trump has promised to protect Americans who have relied on Obamacare insurance subsidies and pre-existing conditions protections, the administration has not said how it would respond to a decision striking down the law.

How disruptive will it be if the courts abruptly eliminate Obamacare?
Industry groups and independent health care analysts say wiping out Obamacare without an alternative would mean a highly disruptive shift in the health care of millions of Americans.
The Affordable Care Act has sharply reduced the number of uninsured Americans since 2010, covering 20 million more people than if the law had not taken effect, according to the nonpartisan Kaiser Family Foundation.
An estimated 52 million Americans have pre-existing health conditions that insurers could‘ve denied coverage to under pre-ACA rules in most states, the Foundation says.
If millions were to lose insurance coverage at once, the costs for all consumers could skyrocket, says Kaiser health care analyst Larry Leavitt.
“If this Texas decision on the ACA is upheld, it would throw the individual insurance market and the whole health care system into complete chaos,” Leavitt posted on Twitter.
“Maybe less obvious are the implications of the Texas ACA decision on the health care industry,” he said. “More uncompensated care with more uninsured; completely upending Medicare payment systems changed by the ACA; repeal of tax increases that funded the ACA; No more employer mandate.”
Copyright © 2018, ABC Radio. All rights reserved.