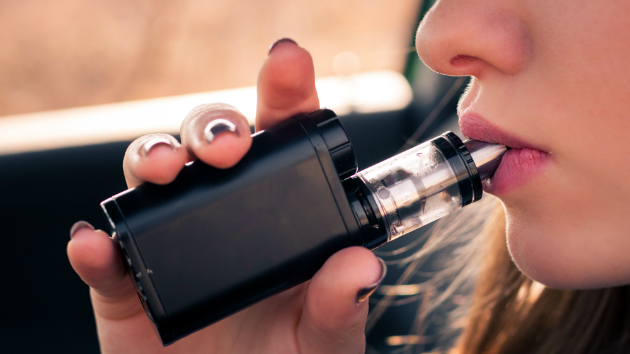 sestovic/iStock(NEW YORK) — Cigarettes and other drugs have taken a backseat to vaping as more teens partake in the activity, making it second only to alcohol in substances used, according to a new survey.
The National Institute of Drug Abuse-funded Monitoring the Future survey looked at vaping rates in teens for the second year in 2018, and found a dramatic increase in the number of teens who used the devices — from 27.8 percent of 12th-graders to 37.3 percent who reported “any vaping” in the past 12 months. That includes students who vaped nicotine, marijuana or hash oil or just flavoring.
The survey assessed drug, alcohol and nicotine and tobacco use — as well as attitudes toward them — in students in the eighth, 10th and 12th grades in hopes of identifying and responding to unhealthy trends.

“It is important for the public to know these numbers in order to most effectively target prevention efforts to the areas of adolescent substance use where they’re most needed,” Dr. Wilson Compton, deputy director of NIDA, told ABC News.
“Adolescence is a key time for prevention,” he added. “It is when the majority of people will try substances for the first time and it is also a key developmental period for the brain.”

The increase in vaping rates translates into about 1.3 million more teens vaping within a single year, wrote Dr. Richard Miech, the lead researcher from the University of Michigan who worked on the survey, in The New England Journal of Medicine.
These numbers are concerning because vaping devices can normalize drug-taking behavior and increase a teen’s chances of substance abuse in the future, Compton said.

In the 30 days before taking the survey, the number of 12th-graders who specifically reported vaping nicotine nearly doubled from 11 percent in 2017 to 20.9 percent in 2018.
“Teens are clearly attracted to the marketable technology and flavorings seen in vaping devices,” Dr. Nora D. Volkow, director of NIDA, said in a press release. “However, it is urgent that teens understand the possible effects of vaping on overall health, the development of the teen brain and the potential for addiction.”
“Research tells us that teens who vape may be at risk for transitioning to regular cigarettes, so while we have celebrated our success in lowering their rates of tobacco use in recent years, we must continue aggressive educational efforts on all products containing nicotine,” she added.
Compared to vaping, the survey found that the use of other substances either remained stable or showed signs of decline, including with alcohol, cigarettes, marijuana, prescription opioids, heroin, synthetic drugs and more.
“The good news contained in these results is also important to share with the public,” Compton said. “Teens should know that the majority of their peers are not using drugs.”

‘Disconcerting’ rise in road rage shootings resulting in death or injury, data shows
Prosecutor says man was wrongfully imprisoned for decades, yet he remains behind bars
Antisemitism surged across US during Gaza conflict, part of multi-year rise: Advocates
Sandy Township votes to end process of possible consolidation with DuBois
Why ransomware cyberattacks are on the rise
Summer road trip? Gas prices should remain steady after Memorial Day weekend high