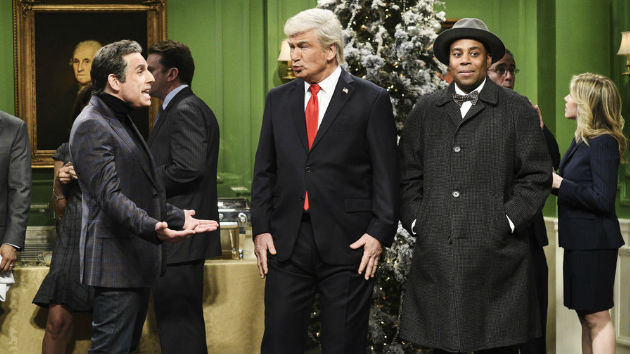 NBC/Will Heath(NEW YORK) — Saturday Night Live took us to a world without Donald Trump as president in a send-up of the classic Christmas film It's a Wonderful Life, with Alec Baldwin’s Trump wishing he was never president.

Kenan Thompson then appears beside him to take him to a party and show him just that reality.

"Everyone looks so different, what are those things on their faces?" Trump asked.

As the sketch progresses, Baldwin’s Trump is visited by a number of people, including Aidy Bryant’s Sarah Sanders, now a successful PR person, and a guilt-free Kellyanne Conway, played by Kate McKinnon.

It's at this point that the faux Trump realizes Hillary Clinton must be president.

"Did they find her emails?" Trump asks.

"Yes, they did," Thompson deadpans. "They were all Bed, Bath and Beyond coupons."

A thrilled Michael Cohen, played by Ben Stiller as always, shows up, no longer facing years in prison.

"I'll see you tomorrow at the opening of Trump Tower Moscow," Cohen gleefully blurts out before exiting.

"This is all so great, it's like Robert Mueller doesn't exist!" Trump exclaims.

Mueller hands him a paper, which reveals a photo of his grandson, not a subpoena.

"I guess the world does need me to be president!" he says.

"Yeah, that was not the lesson at all," a frustrated Thompson says.