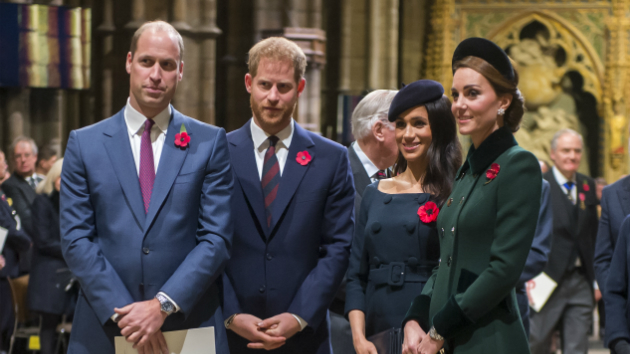 Paul Grover- WPA Pool/Getty Images(LONDON) — Prince William, Kate Middleton, Prince Harry and Meghan Markle will spend Christmas Day together at Sandringham, Queen Elizabeth’s estate in Norfolk.
The couples’ Christmas plans show a united front amid speculation swirling about disputes between Prince William, 36, and Prince Harry, 34, and their wives.
This will be the second year the couples spend Christmas together with Queen Elizabeth and the royal family.
The news came just days after the royals’ Christmas card photos were shared with the public.
William and Kate’s photo shows the couple casually posing with their three children, Prince George, Princess Charlotte and Prince Louis, on the grounds of Anmer Hall, their country home in Norfolk.
Meghan and Harry’s photo was a never-before-seen shot of the couple gazing at fireworks during their wedding reception hosted by Prince Charles. The wedding reception was held at Frogmore House at Windsor Castle, near Frogmore Cottage, where the couple plans to live full-time beginning next year.
The royal family gathers on Christmas Eve to exchange gifts, following the German tradition. On Christmas Day, they join the congregation for the morning service at St. Mary Magdalene Church in Sandringham followed by a Christmas lunch and, later, a buffet dinner prepared by Queen Elizabeth’s chef.
"I think if there have been any disagreements behind closed doors, then I think they will be very careful not to let that show," said ABC News' royal contributor Victoria Murphy. "I think we'll see a show of all of them together enjoying themselves and being united for the holidays."
The announcement of the royal family’s Christmas plans also came just as a division in Meghan’s personal life was made public again.
Meghan’s father, Thomas Markle, gave an interview to Good Morning Britain Monday in which he begged his daughter to contact him. Meghan and her father have been estranged since around the time of her wedding to Harry in May.
"I love you very much. You’re my daughter and I’d really like to hear from you," Thomas Markle said. "Whatever differences we probably have, we should be able to work them out. We’re family. Please reach out to me."
Thomas Markle, who did not attend Harry and Meghan's wedding, also spoke out about his future grandchild. Meghan and Harry are expecting their first child next year.
"There has to be a place for me," he said. "I’m her father and I will be her grandfather to her children."
Meghan, whose mother, Doria Ragland, attended her wedding, is preparing in London not only for the birth of her first child but also for the announcement of the focus of her charitable work.
There are new reports that Meghan, 37, will receive her first royal patronages from Queen Elizabeth in the New Year.
"She's been having meetings behind the scenes to find out more about the charities and organizations that she's considering becoming patron of," Murphy said of Meghan. "She is very interested we know in women's and girls' rights around the world."
She added, "We also know that she's interested in education and equality of education for all, and we know that, with her background as an actress, she is very interested in the arts."
Copyright © 2018, ABC Radio. All rights reserved.

‘No way of knowing’ if Nashville Christmas Day suicide bombing could have been thwarted: Report
Kate Winslet hints that her days filming nude scenes are “numbered”
William Zabka says Cobra Kai saved him from some “brutal” Comic-Con appearances
Prince Harry reveals he uses EMDR to cope with anxiety. What to know about the therapy technique
Prince Harry says he and Meghan ‘chose to put our mental health first’ when exiting royal family
Indiana Jones’ hat, Harry Potter’s glasses and magic wand and more going up for auction