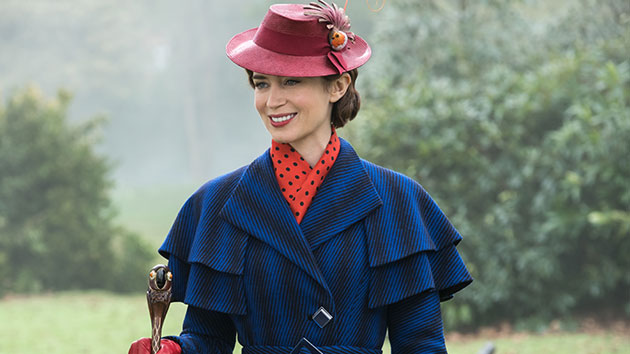 Emily Blunt in "Merry Poppins Returns"'; Disney(NEW YORK) — Looking to relax a bit this week between buying last-minute gifts and wrapping up things at the office before a few days off? Here's a look at some of this week's notable holiday releases.

Remember the influential figures we lost in 2018 with ABC’s prime-time special, The Year in Memoriam 2018, airing at 10 p.m. ET.

Given the armload of awards she's won for her daytime talk show, you can't be blamed if you forgot Ellen DeGeneres started out as a stand-up comic. She reminds us when Netflix today debuts Ellen DeGeneres: Relatable, her first stand-up special in 15 years.

YouTube premium presents Overthinking with Kat and June, out today, a comedy about two girls getting used to one another as roommates. Kat is outgoing and honest, while June is a little weird but means well.

There's no lack of big-budget, big-name movies debuting today. Let's start with Jason Momoa starring in the superhero flick Aquaman. The son of Atlantis works to reclaim his throne and save humanity at the same time. The movie's already a big hit overseas, grossing over $261 million.

In the mood for quirky drama? Steve Carell stars in Welcome to Marwen as a man who creates his own world through an art installation after suffering a viscous attack, and in so doing slowly reclaims his life and sanity.

If comedy's what you crave, Jennifer Lopez stars in Second Act, as a woman trapped in a dead-end job who gets a shot at a corner office after well-meaning friends decide to punch up her resume bit.

On Netflix, Ocean's Eight co-stars Sandra Bullock and Sarah Paulson reunite for the horror thriller Bird Box, set in a world in which you must keep your eyes closed or otherwise, an unknown entity will drive you to suicide by showing you your deepest fear.

Also on Netflix, the new series 7 Days Out documents the last-minute preparations of six major events, including the Westminster Dog Show, the Kentucky Derby and a League of Legends tournament, among others.

And lastly, the second season of Marvel's Runaways is out Friday on Hulu.

And finishing the week with more traditional Christmas fare, the Hallmark channel's Jingle Around the Clock debuts tonight at 8 p.m.

See a life-sized house made of candy come to life on Hulu’s ‘Candified: Home for the Holidays’
Airbnb letting you stay in the ‘Home Alone’ house for the holidays
‘The Bachelorette’ recap: Hometowns week ends with a devastating elimination
How’d you like to stay in the Grinch’s cave for the holidays?
Living jingle: Kim Fields tackles the holidays in the Great Outdoors tonight in ‘Adventures in Christmasing’
Free parking returns to Brookville’s Main St Dec. 1 – Jan. 2