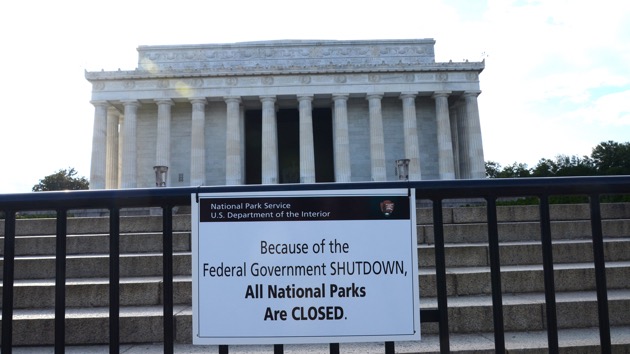 Tim Brown/iStock(WASHINGTON) — Less than five days from the deadline, Congress and President Donald Trump have not made any progress towards averting a looming government shutdown at the end of the week.
Senior aides on both sides of the aisle agreed Monday morning that negotiations remain at an impasse – with little expectation for progress – at least until lawmakers return to the Capitol on Wednesday. That leaves Congress with just three days of legislative business to hammer out the details.
If appropriators fail to strike a spending deal by Dec. 21, a government shutdown will take place. But it would look a little different than past instances, mostly because Congress has already funded about 75 percent of the federal government.
While President Donald Trump said last Tuesday that he would “proudly” take ownership of a shutdown over his demands for a border wall, he has already signed legislation into law accounting for nearly $900 billion of the $1.2 trillion in federal agency operating expenses. As a result, only a fraction of federal agencies would close after funding runs out at the end of the week, and even in those offices, essential employees would still be required to report to work.

What does a partial government shutdown mean?
Even a partial government shutdown could impact hundreds of thousands of federal employees – with workers facing furloughs and unpaid labor – depending on how much of the bureaucracy Congress agrees to fund in the next nine days.
For example, the U.S. Secret Service agents protecting Trump and his family would not be paid during a shutdown. Transportation Security Agency personnel working at airports through the holiday season would also stay on the job during a shutdown, but they’d also have to wait to get paid.
Seven of 12 sections of federal appropriations remain unfunded, accounting for approximately 30 percent of federal workers. Negotiators have signaled that they’ve nearly reached consensus on six of the areas of appropriations, with an agreement on Homeland Security proving to be the most elusive due to disagreements over the president’s demand for $5 billion towards the border wall.

Who does and does not get paid during a government shutdown?
About 420,000 federal employees who are deemed “essential” would continue to work through a shutdown, ensuring that critical operations in government would proceed unhindered. But these workers would not receive any compensation until the shutdown ends and lawmakers pass legislation to pay them retroactively.
That includes federal employees at the Department of Homeland Security, where 54,000 border patrol employees and 53,000 Immigration and Customs Enforcement employees would continue working through a shutdown, though with their pay delayed.

What parts of federal government are already funded?
The spending bills already approved by Congress and signed into law would keep departments operating in defense, labor, education and health and human services. Lawmakers have also cleared bills to fund the legislative branch, military construction, veterans affairs and energy and water development.

What parts of the government face the shutdown?
Beyond Homeland Security, what else could suffer from congressional gridlock? Here are the six additional areas of appropriations that lawmakers are still working to fund for fiscal year 2019, other than Homeland Security:
1. Department of Agriculture, Federal Drug Administration and Rural Development
Routine inspections for food safety would stop, namely for pharmaceutical and plant food testing.
2. Commerce, Justice & Science
Most of the Department of Justice’s employees are classified as essential, so they’ll continue working without pay. According to Sen. Patrick Leahy, the top Democrat on the Senate Appropriations Committee, there are 2,614 Bureau of Alcohol, Tobacco, Firearms and Explosives agents, 16,742 Bureau of Prisons correctional officers, 13,709 FBI agents, 3,600 deputy U.S. Marshals, and 4,399 Drug Enforcement Administration agents would have to wait for paychecks to come once the shutdown ends.
The special counsel’s investigation would also continue, as it is funded with a permanent, indefinite appropriation and all direct employees have excepted positions because their funding is not dependent upon an appropriation that requires renewal.
Most of the National Science Foundation would close down, and NASA would furlough 16,700 employees – accounting for 96 percent of its staff.
3. Financial Services and General Government
Most employees at the Internal Revenue Service – 52,000 of them – would be furloughed since the shutdown is months away from tax season and their jobs are not considered essential at this time.
Most U.S. Secret Service employees, tasked with protecting the president, his family and former presidents, would also continue working without pay.
4. Interior and Environment
National parks, forests and presidential libraries would all send up to 80 percent of their employees home during a shutdown, though many facilities would remain open and somewhat operational with a skeleton crew.
At the Environmental Protection Agency, workers involved in emergency environmental cleanup would continue working, though they’d likely be approved for retroactive pay after the shutdown. Almost everything else at the agency would shut down.
5. State and Foreign Operations
Every U.S. diplomat stationed abroad is designated “essential” and most operations would continue, including the processing and issuance of most passports because it is a fee-based service that essentially pays for itself. Passport offices physically located inside another agency’s building would temporarily close if it is shuttered.
Non-essential staff at the U.S. Agency for International Development face furloughs.
6. Transportation, Housing and Urban Development
Investigations by the National Transportation Safety Board would halt, but air traffic controllers would still come to work — to ensure the safety of the country’s commercial aviation.

Does the post office closed during a government shutdown?

The U.S. Postal Service will not shut down four days before Christmas, contrary to any rumors suggesting otherwise. Though authorized by the U.S. Constitution, the USPS is an independent agency of the federal government, employing more than 600,000 civilian workers.

Trump Administration is already bracing for a shutdown

The Office of Management and Budget has communicated with senior agency officials throughout the administration “to remind them of their responsibilities to review and update their lapse plans and to take other necessary steps to prepare for a potential lapse in appropriations, regardless of whether the enactment of appropriations appears imminent,” a senior Trump administration official said.

When is the deadline?
Funding for these seven appropriations titles expires at the end of the day on Friday, Dec. 21, at 11:59:59 P.M.
Copyright © 2018, ABC Radio. All rights reserved.