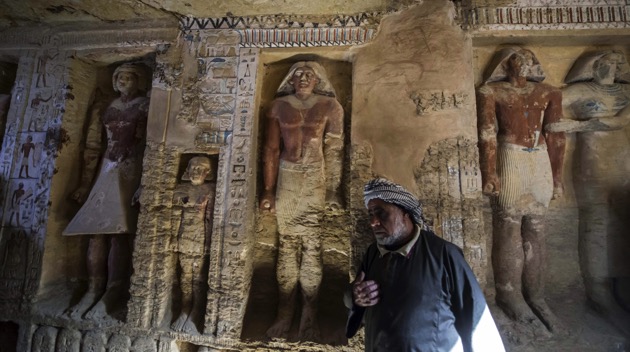 KHALED DESOUKI/AFP/Getty Images(CAIRO) — An Egyptian archeological mission in the south of Cairo unveiled a 4,400-year-old tomb maintained in an “exceptionally well-preserved condition,” according to a statement by the country's Ministry of Antiquities.
The tomb belonged to a Fifth Dynasty royal purification priest named Wahtye.
The discovery was made at the Saqqara archeological site, home to Egypt’s first pyramid, or the step pyramid.
The tomb, which is 33 feet high and 10 feet wide, contained well-preserved, large colored statues, some carved-in rocks and painted walls depicting the priest with his family, according to a statement by Khaled El-Enany, the minister of antiquities, on Saturday.
It also contained scenes depicting wine and pottery making, musical performance and sailing boats, according to Mostafa Waziri, the general secretary of the Supreme Council of Antiquities (SCA) and head of the mission.
El-Waziri explained that the Egyptian archeological mission was able to reach the tomb in November; however, excavation work was needed to enter through the sealed door of the tomb.
The tomb contains five burial shafts, which will require further excavation work to unveil what it is inside, El-Waziri added.

The discovery is the latest in a series of archeological findings announced all over Egypt, which have been heavily publicized by the government in an effort to boost the country’s slow-recovering tourism sector.