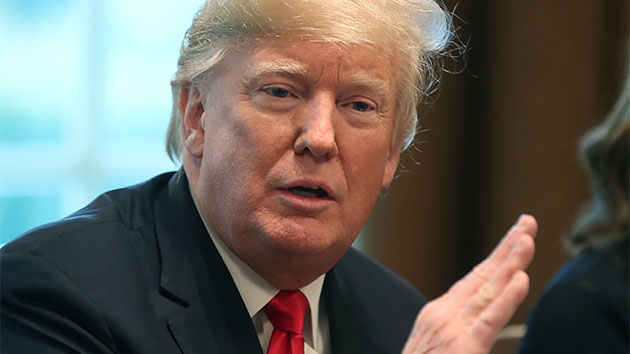 Mark Wilson/Getty Images(WASHINGTON) — A number of Republicans on Capitol Hill are treading cautiously in the wake of Michael Cohen's allegations that President Trump directed him to arrange hush-money payments with two women because the then-candidate Trump "was very concerned about how this would affect the election" if their allegations of affairs became public.
The allegations about Trump's motives, leveled during an exclusive interview with ABC News, by the president's former personal attorney and fixer, came on the heels of Cohen being sentenced to three years in prison for various crimes, including campaign finance violation, tax evasion and lying to Congress.
Federal prosecutors alleged that Cohen violated campaign finance laws by paying off two women who claimed to have had affairs with Trump acting "in coordination with and at the direction of" the then-candidate.
Trump has argued the payments amount to nothing more than a "simple private transaction," and do not qualify as campaign finance violations.
"'Democrats can’t find a Smocking Gun tying the Trump campaign to Russia after James Comey’s testimony. No Smocking Gun…No Collusion.' @FoxNews That’s because there was NO COLLUSION. So now the Dems go to a simple private transaction, wrongly call it a campaign contribution," Trump tweeted Dec. 10. "….which it was not (but even if it was, it is only a CIVIL CASE, like Obama’s – but it was done correctly by a lawyer and there would not even be a fine. Lawyer’s liability if he made a mistake, not me). Cohen just trying to get his sentence reduced. WITCH HUNT!"
The response among Republicans has been reserved.
"I don't think any of us can predict the future," GOP Sen. John Kennedy of Louisiana told reporters on Thursday.
"And I certainly can't read these tea leaves. The U.S. attorney and Mr. Mueller … they have evidence that I'm not aware of, so I don't want to pre-judge it," Kennedy said.
The president's top ally in the Senate — and the next chairman of the Senate Judiciary Committee — Sen. Lindsey Graham demurred when asked if Cohen’s misdeeds could implicate the president.
"Well, I mean, all I can tell you is what I see on the television," Graham said.
Regarding Cohen, Graham said last week: "He plead guilty to some business misdeeds, and they're claiming a campaign finance violation and…I think that would be a difficult case for somebody to prove, but we'll see where it goes."
Another top ally, retiring Sen. Orrin Hatch of Utah, initially pinned the blame squarely on Democrats.
Asked if he had any concerns that Trump was implicated, Hatch told CNN on Wednesday: "The Democrats will do anything to hurt this president."
When he was informed it was alleged by federal prosecutors in New York, Hatch said: "OK, but I don't care, all I can say is he's doing a good job as president."
But on Friday, Hatch’s office released a lengthy statement apologizing for what he called his "irresponsible" remarks.
"I don’t believe the President broke the law, but one of the core principles of our country is that no one is above the law. That means anyone who does break the law should face appropriate consequences," Hatch said.
At ABC News' latest count, only one other GOP senator — Marco Rubio — has gone as far saying that no one, including the president, is above the law.
"If someone has violated the law, the application of the law should be applied to them like it would to any other citizen in this country, and obviously if you're in a position of great authority like the presidency, that would be the case,” Rubio said Sunday on CNN when asked about Trump’s possible involvement in the violation of campaign finance laws.
Rubio said his decision on how Congress should respond to federal investigators' final findings on the payments "will not be a political decision, it'll be the fact that we are a nation of laws and no one in this country no matter who you are is above it."
Meanwhile, Democrats say Trump should be worried.
Connecticut Democratic Sen. Chris Murphy compared the current situation to that of the special counsel investigation that ultimately led to former President Richard Nixon's resignation in 1974.
"The president has now stepped into the same territory that ultimately led to President Nixon resigning the office. President Nixon was an unindicted co-conspirator. Was certainly a different set of facts, but this investigation is now starting to put the president in serious legal crosshairs and he should be worried and the whole country should be worried,” Murphy said on ABC’s "This Week."
Trump has not been named as an unindicted co-conspirator in the Cohen case.
Copyright © 2018, ABC Radio. All rights reserved.