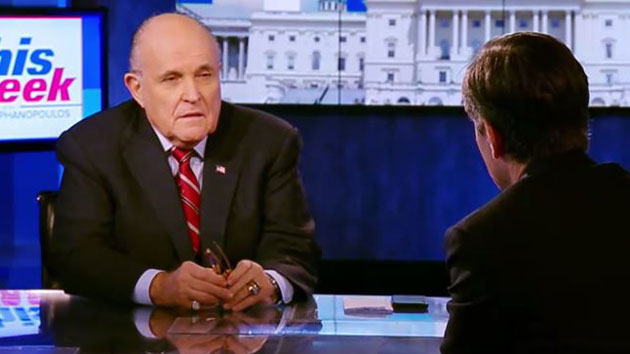 ABC News(NEW YORK) — President Donald Trump's personal attorney Rudy Giuliani blasted the president's former personal lawyer Michael Cohen as "pathetic" and a "serial liar" when questioned about Cohen's claim that as a candidate Trump directed him to arrange hush payments to women who claimed to have past affairs with Trump.
"The man is pathetic. That’s a lawyer you were interviewing," Giuliani told ABC News Chief Anchor George Stephanopoulos on This Week Sunday after watching a clip of Cohen's exclusive interview with Stephanopolous last week. “He's the guy you depend on to determine whether or not you should do it this way or that way.”
In his first interview since being sentenced to three years in prison, Cohen told ABC News that during the campaign Trump did direct him to pay off women with claims of past affairs and that the president knew what he was doing was wrong.
“Nothing at the Trump organization was ever done unless it was run through Mr. Trump. He directed me, as I said in my allocution and I said as well in the plea, he directed me to make the payments, he directed me to become involved in these matters,” Cohen told Stephanopolous in the exclusive interview.
Giuliani said the president maintains that he did not direct Cohen to make the hush payments, which Giuliani said were initiated by Cohen.
"Well, the president said that's false," Giuliani said on This Week when questioned about Cohen's claim that Trump directed his actions.
"And he said it was false under oath," Giuliani continued, referring to Cohen. "He said it was false in his tape recorded conversation with Chris Cuomo. He said it was false on five other tape recorded conversations. He said on those tape recorded conversations that he did it on his own to start and then he brought it to the president and then the president reimbursed him."
In addition to maintaining that the president was uninvolved in the payments initially, Giuliani went further in asserting that the hush payments to former Playboy model Karen McDougal and porn star Stormy Daniels, whose actual name is Stephanie Clifford, were not illegal in the first place.
"It’s not a crime, it’s not a crime, George, paying $130,000 to Stormy whatever, and paying $100,000 to the other one, it’s not a crime,” Giuliani said, pointing to the legal case involving John Edwards, a former U.S. senator and former presidential contender.
When Stephanopoulos challenged that there are major differences with the Edwards case, Giuliani argued there were grounds for comparison and said that because the payments were not solely for the purpose of influencing the election, but also to protect the president's family from embarrassing media coverage, the payments do not meet the legal standard for illegal campaign contributions.
"I can produce an enormous number of witnesses that say the president was very concerned about how this was going to affect his children, his marriage, not just this one but similar — all those women came forward at that point in time, that — that tape with Billy Bush and all of that. It's all part of the same thing. And I know what he was concerned about and I can produce 20 witnesses to tell you what he was concerned about," Giuliani said.
Giuliani went on to characterize the seriousness of the charge of a campaign finance violation.
"Oh right, a campaign finance violation, give me a break," Giuliani said, and sought to draw a comparison to a reporting violation by the 2008 Obama campaign. In that case, the Obama campaign was fined for not properly filing on information regarding a collection of donations in the final days of the campaign.
Though Trump and his team say Cohen is lying, Cohen says it’s the president who is not telling the truth.
“He knows the truth, I know the truth, others know the truth, and here is the truth: The people of the United States of America, people of the world, don't believe what he is saying. The man doesn't tell the truth. And it is sad that I should take responsibility for his dirty deeds.
Trump has maintained that he never directed Cohen to break the law, and if Cohen did, he says he is without fault.
“I never directed Michael Cohen to break the law. He was a lawyer and he is supposed to know the law. It is called ‘advice of counsel,’ and a lawyer has great liability if a mistake is made,” Trump said in a tweet Thursday.