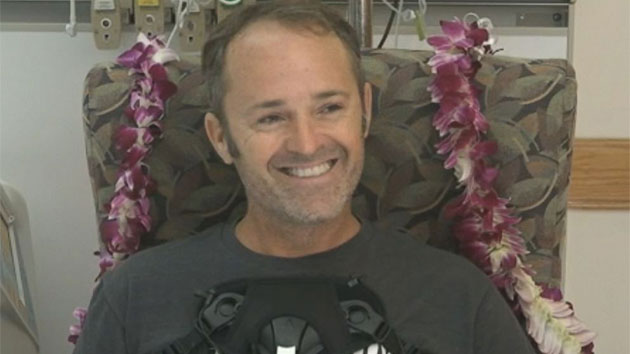 KITV-TV(HONOLULU) — The pilot who crashed a 1950s-era fighter plane into waters off the coast of Honolulu, is crediting a bystander who untangled his parachute with helping to save his life.
Matt Pothier, 47, ejected himself from a plane Thursday after the plane malfunctioned, he told ABC Honolulu affiliate KITV-TV.
When Pothier realized he wasn't going to make it to the runway, he "just pulled the handle and got out," he said.
"I'm just looking down at the water and I see all kinds of boats and things," he said. "I didn't want to hurt those folks either, so I made a couple of turns and realized the airplane's not going to make it, so I just pulled the handle and got out."
Once Pothier was in the water, Mack Ladner, jumped into the ocean help the injured pilot get out of his parachute.
"You can't ask for a better, more qualified person to be right there in an ejection scenario than Mack was," Pothier said. “I mean, I was the most fortunate person ever. I get out of there, I land in the water, I'm in a little pain, and Mack comes up and is like, 'Hey, you alright, dude?' I'm like, 'Yeah, man.'"
In addition, Pothier was able to land safely without injuring anyone on the ground or in the water, KITV reported.
"I was just doing my job at the time," he said. "I think every one of us would try not to hurt anybody, so that's what you do."
Pothier is now recovering from a crushed vertebrae and fractures in his spine, he said.
Joint Base Pearl Harbor-Hickam confirmed to ABC News that a Hawker-Hunter aircraft operated by a civilian contractor crashed into the waters near Sand Island on Thursday afternoon and was rescued.
Pothier said it was his "many years of training" that allowed him to respond well under pressure.
It was the first time he ever had to eject himself from a plane, he said, adding that he's lucky to be alive.
"Don't want to do it again, either!" he said.
The experience won't deter him from going back to the open sky, though.
"I'm just happy to be here," he said. "Looking forward to flying again, looking forward to surfing again, playing a little bit of hockey, and hanging out with my beautiful family — my wife and daughters."

1965 California plane crash may be solved after underwater researchers discover debris
From car crashes to plane delays, cicadas wreaking havoc by the billions
Lake Mead hits lowest water levels in history amid severe drought in the West
Dove Cameron reveals the real reason why ‘Powerpuff Girls’ pilot is being reworked
Mom shares summer water safety warning after saving girls from drowning
Coworkers donate their kidneys to save each other’s husbands