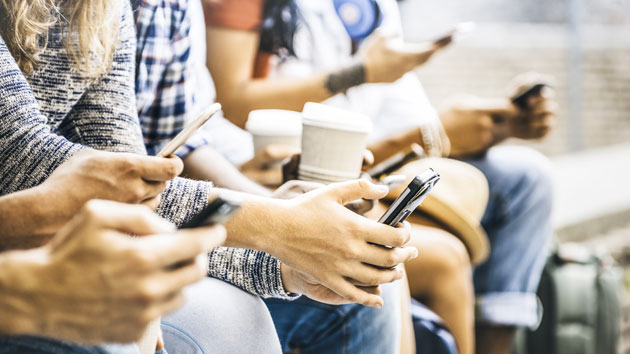 ViewApart/iStock(SACRAMENTO, Calif.) — Feel free to send as many "LOLs," "WTFs" and "u up?" messages as you want, Californians.
A planned vote on a texting surcharge, a tax for texts, will not go forward in January as planned, the California Public Utilities Commission announced late Friday. The reason: not because it was a bad idea, but because the Federal Communications Commission (FCC) made a ruling on Wednesday which would've made the tax unlikely to pass legal muster.
Those precious pennies added to your cellphone bill all come down to the difference between an information service and a telecommunication service.
"On Dec. 12, 2018, the Federal Communications Commission (FCC) issued a declaratory ruling finding that 'text messaging' is an information service, not a telecommunications service, under the Federal Telecommunications Act, which limits state authority over information services," the CPUC said in its statement. "Prior to this FCC ruling, text messaging was not a classified service under federal law. Under California law, telecommunications services are subject to the collection of surcharges to support a number of CUPC public programs that subsidize the cost of service for rural Californians and for low income, disadvantaged communities, and provided special services for the deaf, the hard of hearing, and the disabled."
As the statement said, intrastate telecommunications services, like your run-of-the-mill phone calls, are taxed in California. But texting is a relatively recent phenomenon and there hasn't been a major update of federal telecommunications law since the Telecommunications Act of 1996. It was in that piece of legislation that the federal government made a distinction between information services and telecommunication services.
The FCC's ruling on Wednesday clarified that texting is an information service, and therefore cannot be taxed by California. The CPUC had planned to vote on Jan. 10 to determine for itself which category texting fell under.
"In light of the FCC's action, assigned Commissioner Carla J. Peterman has withdrawn from the CPUC's Jan. 10, 2019 Voting Meeting agenda the draft decision in Docket R. 17-06-023, which proposed to clarify that text messaging service should be subject to the statutory surcharge requirement," CPUC said in its statement.
The text tax would've increased consumers' bills — at least those with text messaging services — by about 7 percent each, according to Republican state Assemblyman Jim Patterson.
Patterson took a victory lap on Saturday in the wake of the CPUC statement, saying, "You can bet I’ll keep a watchful eye on them for future shenanigans. For now…consider the Text Tax cancelled."
Copyright © 2018, ABC Radio. All rights reserved.