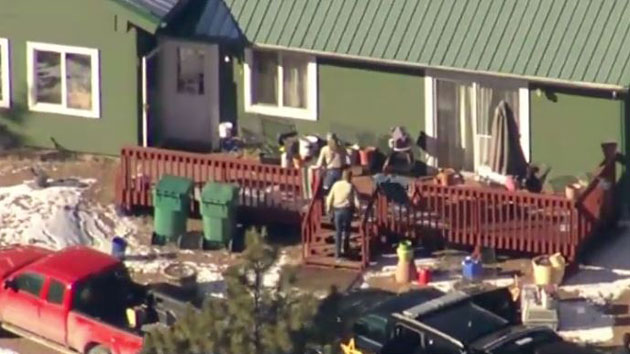 ABCNews.com(WOODLAND PARK, Colo.) — Authorities began digging on the Colorado property owned by Kelsey Berreth's fiance Saturday as the search for the missing mom at his home entered a second day.
The Woodland Park Police Department also announced an anonymous donor is offering $25,000 for information leading to the safe return of the new mom who has been missing since Thanksgiving Day. She was last seen on surveillance video at a Safeway grocery store on Nov. 22 with her 1-year-old daughter. Her fiance, Patrick Frazee, told police he later saw Berreth to pick up their daughter.
Berreth, 29, was reported missing on Dec. 2 by her mother, Cheryl.
Woodland Park police served Frazee with a search warrant on Friday to begin investigating his 35-acre property in the rural town of Florissant, Colorado, about 35 miles northwest of Colorado Springs.
Frazee and Berreth do not live together.
While Frazee has not spoken to the media, he continues to cooperate with investigators. He has not been named a suspect or person of interest.
"Patrick Frazee continues to cooperate with law enforcement in the missing person investigation of Kelsey Berreth," Frazee's attorney, Jeremy Loew, said in a statement Friday. "We understand that a search warrant was executed on Mr. Frazee’s property. Mr. Frazee was never asked to voluntarily participate in this search. We encourage law enforcement to take whatever steps it deems necessary to find Kelsey Berreth and to be able to exclude Patrick Frazee as a possible suspect in this missing person investigation."
A neighbor of Frazee sent ABC News photos of authorities bringing in an excavator to begin digging on the property at about 3 p.m. on Saturday. Authorities completed their search of the property late Saturday, according to Colorado Springs ABC affiliate KRDO.
It is not clear whether they found anything at the home.
The search warrant is sealed and authorities would not disclose what led them to investigate Frazee's home and land in the first place.
Woodland Park Police Chief Miles De Young said Friday that they still want to sit down with Frazee for an interview, but had yet to do so.

Hunting equipment stolen from bed of pickup near Clarion
Pennsylvania laboratory looking for missing portable nuclear gauge
‘My body is not their property,’ a Texas woman’s journey across state lines for an abortion
William Shatner says Prince William is “missing the point” after remarks about space exploration
Biden immigration authorities to end workplace raids
Remains found in California desert may belong to missing 30-year-old