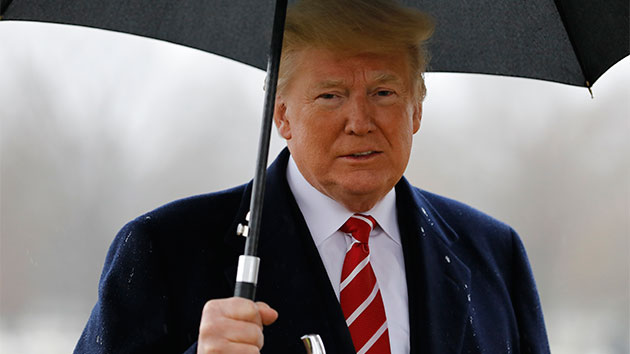 Yuri Gripas-Pool/Getty Images(WASHINGTON) — In his first on-camera comments since a federal court in Texas ruled that the Affordable Care Act is unconstitutional, President Trump called it a “great ruling for the country” and praised the judge who handed down the decision.
“It was a big, big victory by a highly respected judge, highly, highly respected in Texas,” President Trump said in response to a question from ABC News during a visit to Arlington Cemetery Saturday.
The ruling to strike down Obamacare, by Judge Reed O'Connor of the U.S. District District Court for the Northern District of Texas, is expected to be challenged and will likely go all the way to the U.S. Supreme Court.
Once the legal battle plays out, the president said he wants to sit down with Democrats to work out a solution to secure “great healthcare” for Americans.
“On the assumption that the Supreme Court upholds, we will get great, great health care for our people, we’ll have to sit down with the Democrats to do it, but I’m sure they want to do it also,” the president said.
Shortly after the decision on Friday evening, Trump tweeted that "Congress must pass a STRONG law that provides GREAT healthcare and protects pre-existing conditions."
"Mitch and Nancy," he wrote, referring to Senate Majority Leader Mitch McConnell and House Democratic Leader Nancy Pelosi, "get it done!"

As I predicted all along, Obamacare has been struck down as an UNCONSTITUTIONAL disaster! Now Congress must pass a STRONG law that provides GREAT healthcare and protects pre-existing conditions. Mitch and Nancy, get it done!

— Donald J. Trump (@realDonaldTrump) December 15, 2018
White House Press Secretary Sarah Sanders pointed to the court ruling as proof of the president’s conviction that the Affordable Care Act is unconstitutional but also made clear that Obama’s signature law remains intact until the legal process plays out.
“The judge’s decision vindicates President Trump’s position that Obamacare is unconstitutional. Once again, the President calls on Congress to replace Obamacare and act to protect people with preexisting conditions and provide Americans with quality affordable healthcare,” Sanders said in a statement. “We expect this ruling will be appealed to the Supreme Court. Pending the appeal process, the law remains in place.”
While the administration has praised the ruling, Democrats have vowed to fight it.
Pelosi called the ruling “cruel” and “absurd” and vowed that Democrats will take steps to try and bolster President Obama’s signature healthcare law in the new Democrat-controlled Congress in January.
“When House Democrats take the gavel, the House of Representatives will move swiftly to formally intervene in the appeals process to uphold the life-saving protections for people with pre-existing conditions and reject Republicans’ effort to destroy the Affordable Care Act,” she said in a statement.
The American Medical Association said Saturday in a statement that Connor's ruling "violates multiple precepts that guide and limit the exercise of the judicial power."
"And it sets a dangerous precedent that invites politicians to resort to the unelected, life-tenured judiciary when they cannot achieve their political goals through the democratic process," the statement continued. "Elected and accountable officials at the federal and state level continue to debate how best to ensure the provision of quality health care to the American people."