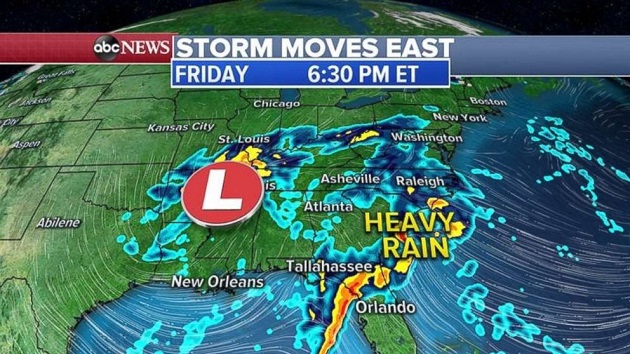 ABC News(NEW YORK) — A storm system crossing the country dropped more than 4 inches of rain in Little Rock, Arkansas, on Thursday and snow in parts of Abilene, Texas.
As the storm moves east, numerous states from Texas to Maryland are under flood, wind and even snow alerts.
The storm is centered over Texas on Friday morning, but the heavy rain ahead of it is already spreading into the Carolinas.
By this evening, severe storms are possible across northern Florida and southern Georgia where damaging winds and a few tornadoes are possible.
Flash flooding cannot be ruled out from Tallahassee, Florida, to South Carolina and North Carolina, including the inland areas that got the heavy snow last weekend.
The heavy rain will move into the mid-Atlantic and part of the Northeast from Friday night into Saturday morning with some flooding possible near Washington, D.C., and Baltimore.
By Sunday, the main center of the storm system will move into the Northeast with more heavy rain and even snow to the north.
Some areas in the Southeast could see 2 to 4 inches of rain, with 5 inches of rain possible in some parts of northern Florida.
Due to a very saturated ground and the snowpack in the Southeast, flash flooding and river flooding is expected. Some of the river flooding could reach a major flood stage this weekend.