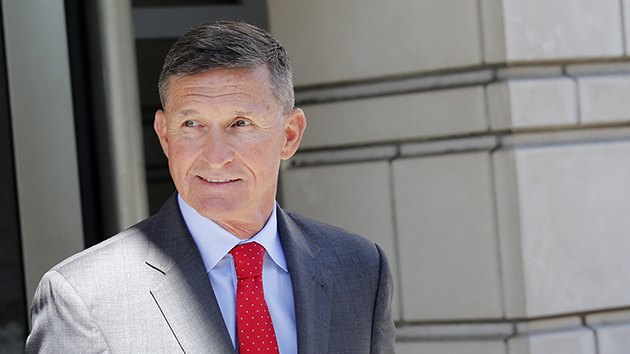 Photo by Aaron P. Bernstein/Getty Images(WASHINGTON) — The special counsel’s office has filed court documents in response to retired Army Lt. Gen Michael Flynn’s sentencing memorandum, in which attorneys for the former national security adviser suggested he was “unguarded” during an FBI interview in 2017.
“Nothing about the way the interview was arranged or conducted caused the defendant to make false statements to the FBI,” the special counsel retorted in court documents on Friday.
The special counsel's team underscored that it felt Flynn's actions were his own.
“The defendant chose to make false statements about his communications with the Russian ambassador weeks before the FBI interview when he lied about that topic to the media, the incoming Vice President, and other members of the Presidential Transition Team.”
The special counsel's comments come in response to a filing by Flynn's defense team on Tuesday in which they gave more information on the January 2017 interview between Flynn and two FBI agents.
In December of that year, Flynn pleaded guilty to lying to the FBI during the interview about contacts he had with Russia's ambassador to the U.S., Sergey Kislyak, during the presidential transition — from election day 2016 until President Donald Trump's inauguration.
Earlier this week, the judge set Friday as a deadline for the government to turn over documents related to the January 2017 meeting for review. Heavily redacted versions of those documents were submitted alongside the filing Friday.
Flynn, who served as Trump’s national security adviser before he left the White House in February 2017, has been cooperating with investigators since, though most of his 19 interviews with the special counsel team occurred early this year, a source close to Flynn has told ABC News.
In the filing earlier this week, Flynn's defense team maintained his guilty plea but suggested that additional context was needed to understand his lies during the FBI interview in January 2017.
Flynn's defense team said that he was not warned of the consequences of lying to the agents before his interview.
The filing said that the agents were concerned that warning Flynn "might adversely affect the rapport."
The office of the special counsel recommended in a filing last week that Flynn receive no jail time in exchange for what they called his "significant" cooperation with the ongoing investigation into Russian interference in the 2016 election. Flynn's legal team echoed calls for leniency in his sentencing.
President Trump tweeted about Flynn on Thursday, alleging that the special counsel had recommended a lighter sentence because prosecutors were "embarrassed" by the way Flynn was treated and suggesting in interviews throughout the day on Thursday that Flynn had not actually lied to investigators.
"The FBI said he didn’t lie and they overrode the FBI," Trump tweeted. "They want to scare everybody into making up stories that are not true by catching them in the smallest of misstatements. Sad!……"
The White House did not clarify what FBI statements the president was referring to when asked by ABC News.
Last year, however, Flynn departed the White House in a move Trump explained in a tweet at the time.
"I had to fire General Flynn because he lied to the Vice President and the FBI," Trump wrote in the 2017 tweet. "He has pled guilty to those lies. It is a shame because his actions during the transition were lawful. There was nothing to hide!"
Flynn's supporters have long insisted he didn't lie to the FBI agents, who included Peter Strozk, a senior agent later dismissed because of embarrassing texts he exchanged with now-former FBI lawyer Lisa Page.
The meeting with Flynn in the White House was set up by then-FBI Deputy Director Andy McCabe, who served as the agency’s acting director after James Comey was fired by Trump as FBI director in May 2017.
McCabe was fired himself this year by then-Attorney General Jeff Sessions after Trump repeatedly complained about McCabe. Flynn's lawyer noted the firings in his sentencing memo.
Sessions, in turn, was fired last month.
Flynn is set to be sentenced on Tuesday.
Copyright © 2018, ABC Radio. All rights reserved.