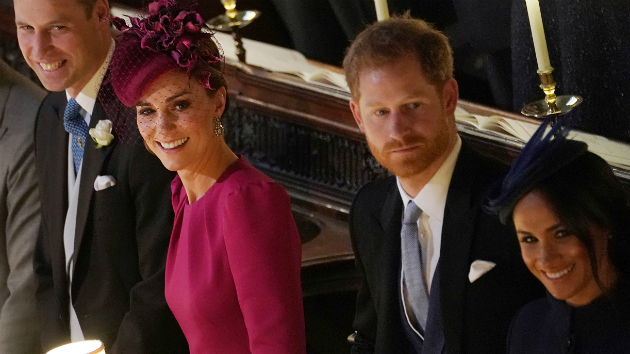 OWEN HUMPHREYS/AFP/Getty Images(LONDON) — Prince George, Princess Charlotte and Prince Louis and a never-before-seen photo of Prince Harry and Meghan Markle at their wedding reception are all featured on the royals’ Christmas cards this year.
Kensington Palace on Friday released the photos featured on the Duke and Duchess of Cambridge and the Duke and Duchess of Sussex’s Christmas cards.
Prince William and Kate Middleton’s photo is a casual shot of them with their three children posing on a tree on the grounds of Anmer Hall, their country home in Norfolk.
William and Kate are both in jeans, while George, the third in line to the throne, is wearing rain boots. Charlotte is smiling in between her parents and a growing Louis, who was born in April, is in the arms of his mom.

The Duke and Duchess of Cambridge are pleased to share a new photograph of their family.
The photograph, taken by Matt Porteous, shows The Duke and Duchess with their three children at Anmer Hall, and features on Their Royal Highnesses’ Christmas card this year. pic.twitter.com/6XqCMlhLi8

Prince Harry and Meghan Markle’s Christmas card photo is a shot of the newlyweds watching fireworks at their wedding reception in May at Frogmore House, on the grounds of Windsor Castle.

The Duke and Duchess of Sussex are delighted to share a new photograph from their Wedding Reception at Frogmore House on 19th May.
The photograph, which features on Their Royal Highnesses’ Christmas card, was taken by photographer Chris Allerton. pic.twitter.com/PQPUuRwnIj

Previously, the only public photos of Meghan and Harry's wedding reception, hosted by Prince Charles, were shots of the couple glamorously driving off to the reception in a Jaguar.
This Christmas will mark Meghan's second with the royal family but her first as a full-fledged member of it.
Harry and Meghan, who are expecting their first child, are expected to spend Christmas in Norfolk with the royal family, including William and Kate and their three children.
The royal family gathers on Christmas Eve to exchange gifts, following the German tradition. Meghan will not have to worry about buying expensive gifts for her new relatives, as members of the royal family will often swap funny gifts.
On Christmas Day, they join the congregation for the morning service at St. Mary Magdalene Church in Sandringham. After the service, the royal family greets well-wishers outside the church before heading back to Sandringham for Christmas lunch.
After lunch, the entire family sits down to watch the queen's annual televised Christmas message.
In the evening, the royal family gathers again for a Christmas buffet dinner with 15 to 20 different delicacies prepared by Queen Elizabeth’s chef. A toast is part of the meal, which ranges from roast beef to turkey and ham.
The day after Christmas, known as Boxing Day in the U.K., finds the royals partaking in the traditional Boxing Day pheasant shoot on the grounds of Sandringham.
Copyright © 2018, ABC Radio. All rights reserved.