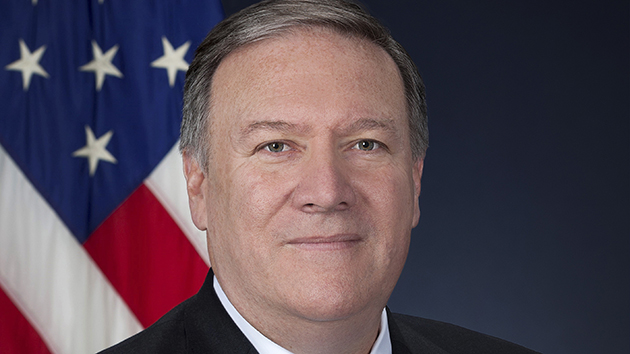 Credit: US Department of State
Posted on December 14, 2018 by ABC News

Credit: US Department of State(WASHINGTON) — Secretary of State Mike Pompeo called the detention of two Canadians in China "unlawful" and said "they ought to be returned."
Speaking alongside Canadian Foreign Affairs Minister Chrystia Freeland, as well as U.S. Defense Secretary James Mattis and Canadian Defense Minister Harjit Sajjan, Pompeo said the U.S. is working to help get them returned, but did not provide details.
"We ask all nations of the world to treat other citizens properly and the detention of these two Canadian citizens in China ought to end," he added.
China's detention of the two Canadians — a diplomat and a businessman — comes after Canada arrested Meng Wanzhou, the CFO of Chinese telecom giant Huawei, on an arrest warrant in the U.S. A Canadian judge is deciding whether to extradite her to the U.S.
But Pompeo denied that Meng's arrest was related to the U.S.-Chinese trade tensions, saying the U.S. was engaged in a legal process and seeking a "just outcome."

Citing the various issues in U.S.-Chinese relations, Pompeo added, "We work on each of those to get good outcomes for the people of the United States of America and respecting the rule of law each step along the way. We'll do that here as well."
This is a developing story. Please check back in for updates.
Copyright © 2018, ABC Radio. All rights reserved.