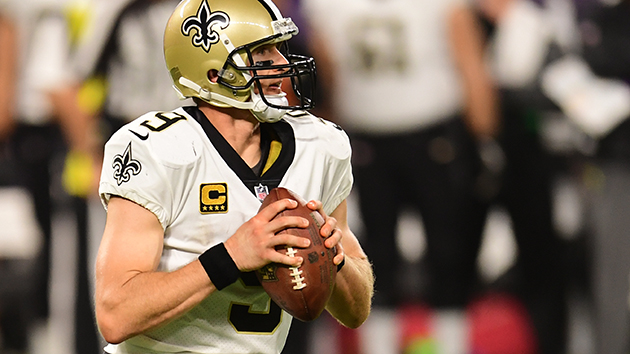 Photo by Phil Ellsworth / ESPN Images(NEW ORLEANS) — After he set the NFL career passing yards record earlier this season, New Orleans Saints quarterback Drew Brees set out to do something special to recognize all of the players who played a part in the record.
So, he surprised nearly 200 former teammates, coaches and mentors with commemorative footballs this week.
"I wanted to do something for everybody," Brees said. "You just start thinking about all the guys that had a hand in that."
Among the big names who received a football from Brees, former San Diego Chargers teammate LaDainian Tomlinson, ex-Saints wide receiver Brandin Cooks (now playing for the Los Angeles Chargers), and Carolina Panthers offensive coordinator Norv Turner (Turner's Panthers are the Saints' next opponent).
Brees credited Saints general manager Mickey Loomis, and members of the communications staff with putting together a list of teammates and tracking down addresses and other information. The 39-year-old initially wanted to honor every player who had ever caught a pass from him, but said he then thought about every offensive lineman who blocked for him and every coach he has had.
"It was actually a long list," Brees said. "But I just wanted to do that for them."
One other person who received the gift was Dr. James Andrews, who performed surgery on Brees' shoulder in 2006.
Copyright © 2018, ABC Radio. All rights reserved.

When should I mail holiday gifts? USPS, FedEx, UPS release 2021 ship-by dates
Drew Barrymore reveals how she will tell her daughters about her “wild” past
Jon Bernthal says ‘The Many Saints of Newark’ is “its own thing” and not another episode of ‘The Sopranos’
Drew Barrymore raves about her ex-husband’s new wife: “I absolutely worship the ground she walks on”
As New Orleans jazz community weathers crisis upon crisis, music uplifts
Drew Barrymore reveals how she’s been supporting Britney Spears behind the scenes