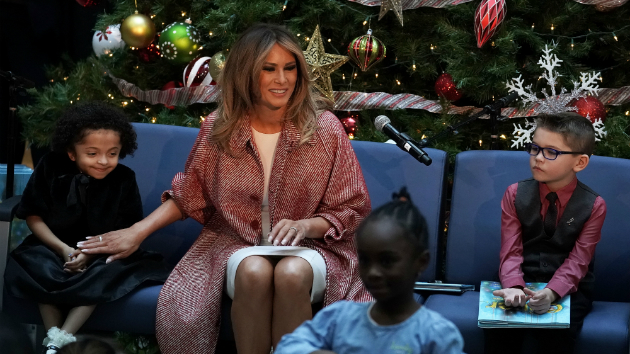 Alex Wong/Getty Images(WASHINGTON) — First lady Melania Trump visited the Children's National Hospital in Washington, D.C., on Thursday, continuing a tradition followed by every first lady since Bess Truman more than 60 years ago, according to the White House.
It came on the heels of a Fox News interview in which, asked about criticism, she said, "I follow what’s going on. And I give my husband advice and my honest opinion. And sometimes he listens and sometimes he doesn’t."
During her visit to the hospital's neonatal intensive care unit, to meet with families and their children who have graduated from the program, a 7-year-old girl told Trump that she wanted a dog for Christmas. The first lady then asked if she had a name in mind, to which the child replied, "Peppermint."
Trump then read Oliver the Ornament to children who are current patients. The story is about an ornament who is pushed around by others, playing to the first lady's "Be Best" campaign and its prevailing anti-bullying message.
The holiday visit followed her interview with Fox News that aired Wednesday night, in which she shared her views on her first two years in the White House while visiting troops on the USS George H.W. Bush. During the visit to the troops, the first lady posted a photo to Twitter wearing a USS George H.W. Bush baseball cap while aboard a flight on a V-22 Osprey, a military aircraft — making history as the first presidential spouse to take the flight.
Trump said the hardest part in her role was coping with people who she said frequently "use" her and her husband.
“I would say the opportunists who are using my name, or my family name, to advance themselves — from comedians to journalists to book writers," are the most difficult parts of the job, Trump said.
The first lady then said she is prepared for regular criticism, but added she does what she believes to be correct.
“I know I will get the criticism — from the public or from the media — but I will do what is right and what I feel is right for the country and for the people," she said.