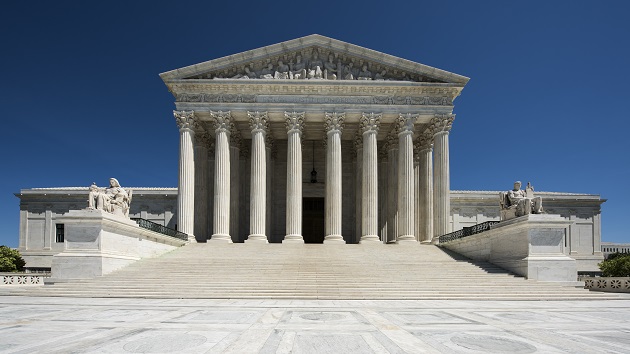 iStock/JPecha(WASHINGTON) — Supreme Court Justice Ruth Bader Ginsburg, in her first public remarks following a health scare last month, hailed immigrants as the “vanguard” of an effort to remove “stains” of discrimination from American society.
“The Constitution sets out the aspiration to form a more perfect union,” Ginsburg said, addressing 31 newly naturalized American citizens who had just taken the oath of allegiance. “While we have made huge progress, the work of perfection is far from done. Many stains remain."
“As well informed citizens you will play a vital part in that endeavor,” she said. “First by voting in elections, serving on juries and participating in civil discourse.”
Ginsburg spoke in near darkness at the National Archives, standing before the delicate original documents of the U.S. Constitution.
Saturday marks the official 227th anniversary of the ratification of the Bill of Rights, the first ten amendments to the Constitution.
As much of Washington remains embroiled in a heated debate over immigration and border security, Ginsburg pointed out that more than 20 million current citizens were born in other countries, coming to America “to provide a better life for themselves and their families.”
She argued, in a striking contrast to the rhetoric coming from the White House, that “the founders of the US proclaimed that the heart of America would be its citizens, not its rulers.”
“May the spirit of liberty … be your beacon,” she told America’s newest citizens, who came from 26 different countries, “as you play your part in helping to achieve a more perfect union.”